The Hour Before My Brother Dies (1986, Australia) 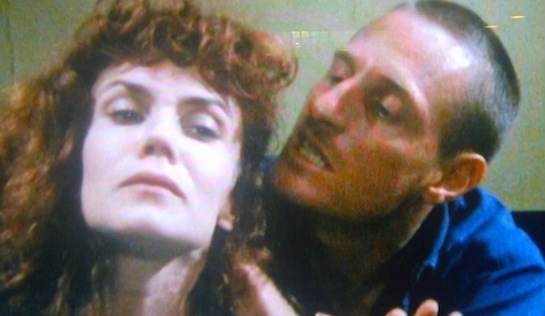 This made-for-TV film was adapted from Daniel Keene’s stage play, and examines some awkwardly dysfunctional relationships in a troubled family in the context of a condemned man’s last hours.

The adaptation remains very stagy, with virtually all of the action taking place in one visitors’ room in a Melbourne prison. A young man, Martin Black (Peter Hehir), is within an hour or so of being hanged for the murder of a shady criminal associate. He has been in custody for 18 months; his younger sister, Sally (Rhonda Wilson), has not visited him in all of that time. Nor have they had any contact for some time prior to that. But she visits now.

Their relationship is not a conventional brother-sister relationship. Their mother died suddenly while they were young. Following her death their father’s grief was not conventional either; he lived with the corpse for days, and then drowned himself in alcohol (a practice to which he still subscribes). Back then, Sally would tell stories to her distraught older brother until he fell asleep so that he would not dwell on his mother’s memory.

In the one hour they have together before Martin is hanged, they re-enact their father’s abuse and relive the key moments in their own tumultuous relationship. They recall a very hot New Year’s Eve years ago, where they kissed and fondled, but when Sally invited Martin to sleep with her, he pushed her away. Hurt and confused (why would he pretend that she was not his sister when they went to dances, but now use the sibling relationship as an excuse to reject her?), she wakes her father from a drunken stupor and ‘confesses’ that they are lovers. When his father does his block and kicks him out, Martin doesn’t try to defend himself. He doesn’t bother to tell him that Sally’s assertion is not true – his silence acknowledging that they were very much lovers, even if the love were never consummated. The same acknowledgement was not one he was prepared to give to Sally; she hated him for it, and cut him off for years. Tricky.

It is a wild hour they spend together; at various times one or both are silent, angry, sensual, sad, vicious, grieving, hurt, flirting, yearning, passionate, tender, maternal. Extraordinarily, the prison officers who watch through a one-way mirror do not intervene; not when Martin grabs Sally by the hair as he plays out the violence of his father, not when they engage in overtly sexualised play. Is that because one should not intrude at such an intensely private time, or deny a condemned man his last wish… or due to sheer inertia, or voyeurism? We don’t know; the latter, we suspect. 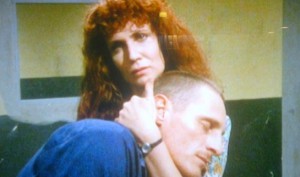 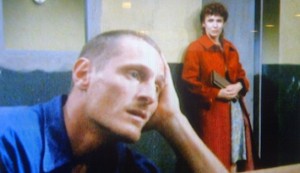