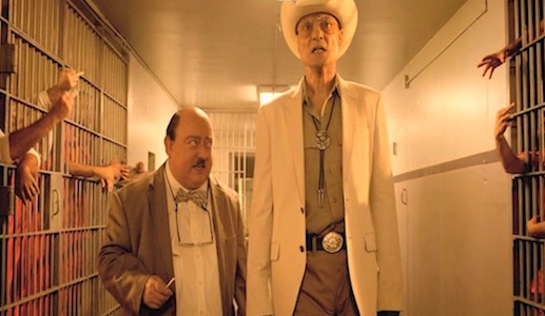 In the third part of this crass trilogy, writer and director Tom Six sets out again to provoke outrage and disgust. And in that, and pretty much that alone, he succeeds.

This (hopefully) final sequence exhumes Dieter Laser from the first film (2009), here playing Bill Boss, Warden of the George H W Bush State Prison, and Laurence R Harvey from its second iteration (2011), this time as Dwight Butler, the prison’s accountant. Boss is German-born, tall and cadaverous. Butler is short, corpulent and sports a brownish Hitlerish moustache designed to curry favour with his boss.

Boss is old and miserable, an outrageous racist, sexist, and sadist; a caricature of a caricature. He breaks one prisoner’s elbow, pours boiling water over another’s face. He receives sexual favours from his busty secretary (Bree Olson) in return for her prisoner father’s freedom. He castrates another prisoner with his pocket knife, and shoots a colostomy patient through his stoma. He drinks regularly, rants constantly and refuses to attend the prison’s executions because they are undertaken with a “sissy needle.”

It’s relatively late in the piece that the notion of the human centipede (sewing the lips of one person to the anus of another, creating a chain of people with a continuous digestive tract) takes hold. Butler is a fan of the first two films and waves copies of the films’ DVDs around, hoping to excite some interest in his boss to try it out. He invites Tom Six (playing himself) to meet Boss, selling the centipede idea on the basis of cost-cutting but knowing that it will appeal to Boss’s sadistic instincts. Once sold on the idea, Boss approaches it with great fervour.

It is, of course, gross. But the violence that precedes it (including a dream sequence in which the prisoners avenge Boss’s treatment of him by raping him in a wound created near his kidneys) makes the centipede almost benign and, given the sheer practical ridiculousness of a chain of hundreds of prisoners all sewn together, a little cartoonish.

One centipede movie would have been sufficiently shocking. Three is pure indulgence, made worse by the need to up the grossness to keep freshly shocking audiences. Of which one hopes there are declining numbers. 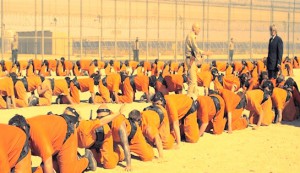 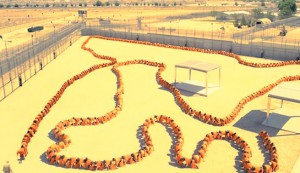