The Informer has a little more complexity than most action thrillers. But not so much that it explains why IMDb’s précis (“An ex-convict working undercover intentionally gets himself incarcerated again in order to infiltrate the mob at a maximum security prison”) pretty much misses the point entirely. ‘Intentionally gets himself incarcerated’, yes, but he returns to prison extremely reluctantly, and only when two figurative guns are pointed at his head – one by the mob and the other by the FBI.

Based on the Swedish crime novel Three Seconds by Anders Roslund and Borge Hellström, this is a British production, filmed in part at the recently closed Gloucester Prison in England, set in New York and involving a tense wrestle between two heavy-hitting American institutions – the FBI and NYPD – and Polish organised crime. It’s nothing if not international.

Piotr (Pete) Koslow (Joel Kinnanan) is a decorated veteran, plucked out of prison four years into a 20-year sentence for manslaughter (following a fight in a bar after his wife, Sofia, was subjected to crude remarks). In the years since he has been working undercover, providing security for the Polish consulate, helping the FBI try to put the boss of a Polish crime syndicate, Ryszard ‘The General’ Klimek (Eugene Lipinski), behind bars – part of an off-the-books operation led by Special Agent Erica Wilcox (Rosamund Pike). Why off the books? Who knows.

Anyway, as part of his embassy role he picks up 6kg of fentanyl smuggled into the US in Polish diplomatic pouches, and is en route to deliver it Klimek, whom he hopes to implicate in the importation and distribution of the drug, when his excitable partner goes off script and drops in on a recommended buyer. Koslow twigs that the edgy buyer is a cop, and gives him an out; the undercover cop doesn’t take the hint and is shot dead by his trigger-happy sidekick. As soon as things go bad, the FBI abandons him at the scene.

The General is not amused; the killing of a NYPD cop is bad for business. Neither, it must be said, is the FBI. Klimek, politely but convincingly menacing, makes Koslow an offer to make amends that Koslow hopes he will be able to refuse: to breach his parole, go back inside to his former prison, Bale Hill, and take over the drug empire there, establishing an army of ex-prisoners whom The General can use upon their release. Koslow looks desperately to the FBI to bail him out, but with the botched unofficial operation and their snitch being present when the NYPD man was killed, they want to remain at arm’s length. Yet they still want Klimek. With no other options, other than his death and/or the deaths of his wife and daughter if he refuses, Koslow intentionally gets himself incarcerated, hoping to both work for The General and gather enough information on him to have him put away. The FBI at least briefs the prison warden to get Koslow’s path smoothed. Tough gig, nonetheless… and back into Bale Hill he goes.

Meanwhile the NYPD’s Detective Edward Grens (Common) is hot on Koslow’s heels and knows that the FBI was somehow connected, too. When confronted, Wilcox and her boss, Keith Montgomery (Clive Owen), deny everything. Grens takes the unorthodox step of following Koslow into the prison (not normally the most comfortable place for a cop) and speaking to him by phone… in full view of all the prisoners in the yard. That red lights him and throws just a little bit of unwanted pressure his way.

A big welcoming shakedown organised by the warden had been designed to create the demand that Koslow would then be well placed to meet. But the prison’s African-American drug cartel, in league with a nasty, corrupt correctional officer, Slewitt (Sam Spruell), have some minor objections to the new competition. They entice him into the chapel, beat him and hang him by the neck until he confesses that he’s a snitch. He is only spared his life when he convinces them that if they provide him with The General’s distribution chain, their burgeoning competition will be disrupted or extinguished. After weighing the options, they give him a list of names.

Koslow gives the warden that list and pleads to be placed in solitary. The warden, however, no longer wants to know him, and leaves him fully exposed. Wilcox, ordered by Montgomery to ‘burn him’, can no longer have his back. The General’s men might not react well to being on his list. Grens (referring to himself as ‘The Hangman’) will only be on his side if he sheds light on the death of his undercover man. His wife Sofia (Ana de Armas) and daughter are further imperilled the community. Koslow finds himself an admitted snitch, living in the general prison population, abandoned, under attack from all sides, with nowhere to go and very much on his own.

He creatively takes matters into his own hands. That may or may not involve taking Slewitt hostage. It does involve an impressive plan formulated on the run and builds to a satisfying action/thriller climax.

As for the prison content, amidst the requisite collection of impressively tattooed and muscled extras, there are some nice touches; I particularly liked Koslow grabbing at books and newspapers to stuff under his shirt, fearing an imminent shank attack, followed by the studied, minding-my-own-business indifference by other inmates when the inevitable attack comes.

As far as these sorts of movies go, it’s not a bad one. 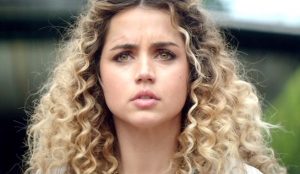 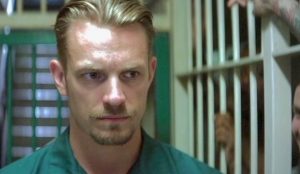 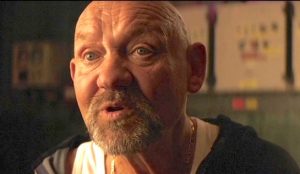 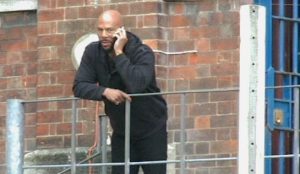 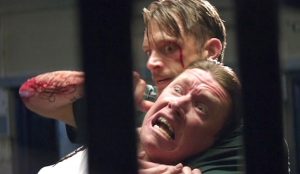 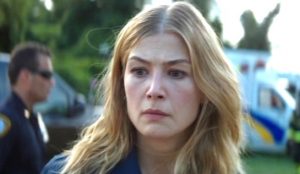