At first blush, this is a wacky story of an island prison somewhere in Asia, ruled by a maniacal American, and featuring much creative brutality and some innovative implements of torture; the sort of film to which adolescents might be attracted. It was a bit of a surprise to learn later that it is based on a true story from the 1960s: that of the experimental penal colony Pulau Senang, just off the coast of Singapore, and the riot which led to its closure.

The Superintendent in the film, (played by Richard Grosse), is the only Caucasian on the island and a misanthropic sadist. His character is based on Daniel Dutton, an Irishman who set up Pulau Senang based around the motto, ‘All our evils can be conquered by hard work: We can sweat the evil out of us.’ It’s a dictum that the Grosse character also lives by. And has pinned to his wall, in case he forgets.

Dutton was convinced that he could make decent citizens out of hardened criminals through just sweat and an ultra-strict regime. On 12 July 1963, three years after the penal colony opened, 70 to 90 prisoners rioted in protest at their harsh treatment and conditions, killing the hated Dutton and two other officers. 58 were accused of murder; 18 hanged. The experiment in applied penology was terminated in 1964.

Now, I have no idea how much of Daniel Dutton is in the film’s Superintendent, nicknamed ‘Foreign Devil’ by the prisoners, but if it is anything like an accurate depiction you can understand why they revolted. If only because he continues to shout and scream at them in English.

The Foreign Devil calls all prisoners not by their names, but by variants of the insult ‘Dog’: Black Dog, Dumb Dog, Tongue-tied Dog, Crazy Dog, Thin Dog, Square Dog, Bitch. He cripples the newly arrived Fat Dog by shooting him in the feet for insubordination. He forces another, Little Blackness, to eat a large bowl of chili, and when he finds that Little Blackness loves chili, he directs that he be strung up on a bamboo bed for two days (a rack designed to simultaneously destroy the prisoner’s back and expose him to horrific sunburn). Five others are placed out in the elements wedged upright between two panels – a human sandwich – for several days; they are fed by throwing rice into the top and they catch whatever they can in their open mouths.

One prisoner, Wrinkly Dog (Feng Ku), who has been at the prison (maybe just in prison) for ten years and is within days of release on his 60th birthday, is unable to resist eating some chicken which others have killed and cooked – at a time when as punishment they were forbidden to eat food for two days; the Foreign Devil strips him of his last chance of release and hands that chance instead to Dog Shit, the snitch who ratted on him and who openly passes information on all his fellow prisoners to the officers.

Soon thereafter, the Superintendent takes leave of the island and, in his absence, the smirking Dog Shit returns. This time as an officer. With a baton and a desire to see his former associates endure a little more discomfort. Oh oh.

The Foreign Devil had clearly hoped to be relived of his posting, and when he returns he is decidedly not happy. To relax, he calls on the whimpering Bitch, who has been generously servicing the sexual needs of many of his fellow prisoners, to provide him with a similar service; Bitch dissolves into tears and so the Devil breaks his fingers with a baton and by jamming them into a cupboard door. The Devil doesn’t handle rejection well.

Tensions are raised a tad more when Dog Shit, intent on making his presence felt, keeps striking the unarmed Hot Dog with a baton… until Wrinkly stops him by putting a mattock thing through his shoulder. The Foreign Devil cuts the older man’s celebrations short by summarily executing him.

The final straw comes after the prisoners kill a pig; they are made to line up, squat, and eat their own faeces (delicately depicted, fortunately), and then made to work all night in the pouring rain. It’s no surprise, really, when they then decide they’ve had enough and attack the unarmed contingent of guards with sticks and hoes, beating them all and killing several. They smoke the Foreign Devil out of his bunker and bludgeon him to death with such vigour that he would be proud of their efforts to sweat the evil out of their lives.

Then armed reinforcements arrive; the prisoners surrender; many swing from the gibbet. End of story.

This is a really odd film. It exults in every weird torturous contraption; each punishment vying with the next to be the more brutal, the more degrading. Yet it is also full of pathos and concern – particularly, not surprisingly, for those who bear the brunt of the officers’ wrath. The prisoners are vulnerable, pitilessly abused, and in one powerful scene when they work themselves into a trance-like state, singing a song and laughing… just boys. In contrast, the loathsome Foreign Devil is something of a caricature, just as Daniel Dutton may have been.

Its strongest message is that sometimes evil is conquered by things other than hard work. 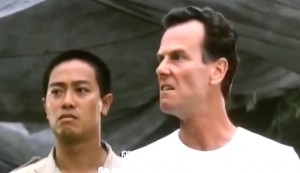 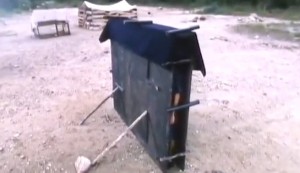 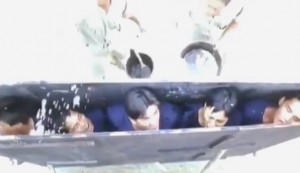 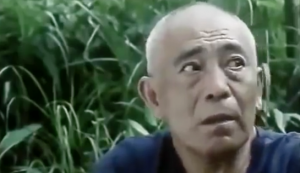 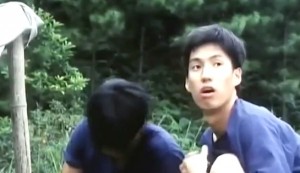 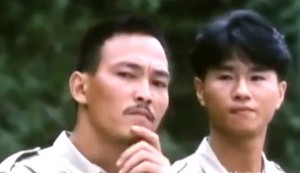