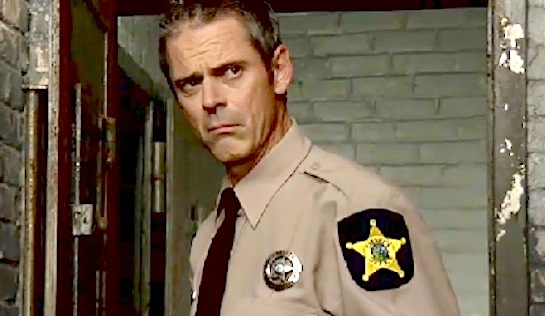 Jailhouse as haunted house. It’s not the most novel of concepts.

Seth Delray (C Thomas Howell) and his family have been living on the ground floor of an abandoned local jailhouse in small-town Colton (filmed at the Pender County jailhouse, Burgaw, NC, built in 1924) while their new home is being fixed up. He is new to the job of Deputy Sheriff and has been living in the house for three weeks when the new jail is damaged by fire and the Sheriff decides to reopen the old cells and move half a dozen prisoners – including one woman – on to Seth’s first floor. Mrs Delray and the two little Delrays aren’t overly pleased.

The cells come with some history. In the 1920s there was a hard-drinking, racist, brutal Deputy who was ultimately set upon by the inmates and beaten to death. Seth picks up his badge, which has been gathering dust for 80-odd years, pockets it, and immediately starts channeling its hateful former owner.

This is good news for neither Seth’s family, who move out after he uncharacteristically strikes his son, nor the prisoners, who don’t have quite the same ability to move out. The prisoners don’t seem to have been chosen on the basis of their risk profile: there is Waylen (Nate Panning), an edgy, slightly crazed murderer, Stark (Rey Valentin), expecting bail on a DUI matter, Pablo (Mark Darby Robinson), an eccentric bouncer of bad cheques, Maddy (Lindsey McKeon), on drug-cultivation charges which her boyfriend seems to have escaped, Cash (Sahr Ngaujah), a bookish African-American, and Donnie (Darren Dalton), an unpleasant man who tries to sexually assault Maddy when the doors separating the cells are rather sloppily left open.

Spoiler: the bodies start to pile up. Half-spoiler: there is an unexpected twist at the end, which makes it much more tolerable.

It’s not helpful to say that this wasn’t as bad as I expected, but it’s neither terrifying, as you might expect a horror movie to be, nor – given that Seth is possessed by a evil spirit – an opportunity to explore the nature of evil, or his character’s descent into evil. It’s like a ghost story in which you have little investment.

And for prison aficionados, it’s a good exercise in how not to run a jail, even a six-cell jail. 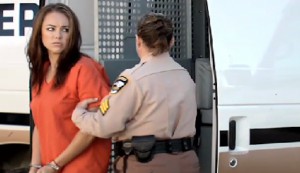 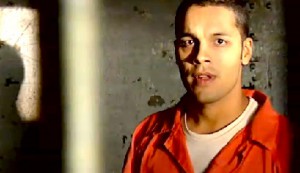