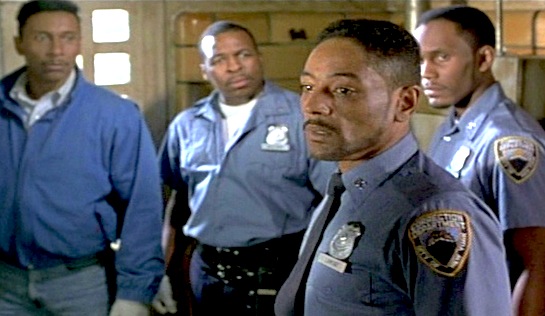 Paul Lamont (Giancarlo Esposito) is a bookish correctional officer working in the most bookish part of Brooklyn’s King’s County House of Detention – the law library. He’s a bit at odds with his fellow guards; he’s studying law at night school, he’s not yet so cynical that he regards every prisoner as scum, he has a middle-class schoolteacher wife, and he thinks a bit too deeply about the impact of what he does at work. He takes his work home with him. In every sense, it turns out.

The law library is not what you might expect. The guards who work there appear to think that it’s part of their role to interrogate and harangue each prisoner who wants to study there, to convince them of their guilt, and to exact their own form of justice if they think the prisoners need to be further reminded of their worthlessness. Violence against prisoners is not uncommon in angst-ridden movieland prisons, but even in the movies one would think that the law library is hardly at the pointy end of prisoner-guard conflict.

Anyway, his colleagues’ approach doesn’t sit easily with Lamont, and his problems with it really start after he encounters Jean Baptiste (Isaach De Bankolé), a Haitian immigrant baker charged with rape. After his ‘induction’ into the law library, Baptiste tries to hang himself; Lamont cuts him down and resuscitates him – and so starts a bond between the two that is to have dramatic consequences.

Baptiste continues to protest his innocence. Lamont believes him. So much so that he pays a visit to the complainant in the rape case in attempt to get her to drop the charges, and then pays $1,500 to bail the man out. Perhaps he missed those lectures about witness tampering and professional boundaries. To top it off, he then gives the freed Baptiste a place to stay when he has nowhere else to go – much to the chagrin of his wife, Angela (Regina Taylor), who is oddly not keen to having an alleged rapist stay in her house.

Lamont, it must be said, has issues of his own. His late father was Haitian, and as a kid he was hugely embarrassed by his dad’s differentness. Thirty years on, he still can’t come to terms with the Haitian part of himself. So while he believes in Baptiste’s innocence, the Haitian brings with him a sensuality, a whiff of voodoo, and a reminder of his own cultural heritage that well.. irk him.

Angela is more open, and soon starts to believe in Baptiste, too. What’s more, she embraces his exoticism, but over time this serves only to make Lamont more and more jealous. Fearing a growing intimacy between the Haitian and his wife, he kicks the man out of his home and back on the streets. Angela continues to visit Baptiste where he has found some shelter, and continues to support him. Lamont finds out and his anger and jealousy escalate. He takes it out on the prisoners at work, winning his colleagues’ approval.

And then it completely unravels for the guard who started out wanting only to do what he thought was right. As things move inexorably in his life towards a tragic ending, the prisoners rise up against his colleagues, their tormentors. For many of them, there is no way out. It’s powerful, but not pretty. 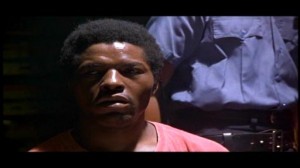 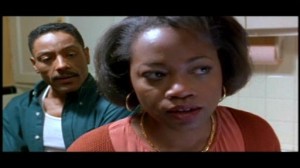