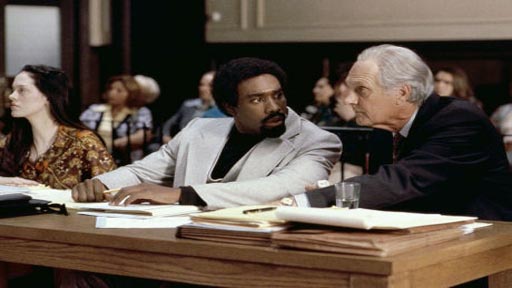 There are more films about Attica, it seems, than any other correctional event. This is not the best of them, nor the worst.

It’s pretty much your traditional courtroom drama, based on the prosecution of Bernard Stroble, aka Shango, in the aftermath of the September 1971 riot at Attica which left 39 dead (29 prisoners, 10 guards) and 80 wounded. State troopers put an end to the unrest by firing 2200 rounds (of which Shango wore three) into the mass of prisoners and their guard hostages. Following the riot authorities claimed that the dead guards had had their throats cut by the prisoners; it later transpired that nine, I think, were shot by the troopers. None of the troopers were charged. Shango, seen to be one of the ringleaders, was however charged with slitting the throats of two white prisoners.

Shango (Morris Chestnut) is proud and charismatic. A leader. He is represented by white civil rights lawyer Ernie Goodman (Alan Alda). There is the obligatory lack of trust at the outset, which predictably grows into genuine regard and concern for each other by the end. Goodman is assisted by law student and activist Linda Borus (Rose McGowan), who works as his researcher (and finishes up, outside the film, marrying Shango in 1979 and having a son with him). To add to the drama, the ailing Goodman has a number of worrying wobbly spells – diagnosed mid-trial as Trans-Global Amnesia, a precursor to a stroke – but battles on worthily (ignoring doctors and medication) to add to the worthiness of his fight for a worthy cause.

The prosecution is represented as relying entirely on the evidence of racist investigators and ex-prisoners who have been harassed into making false statements and given inducements to testify. And as relying on dirty tricks, such as having the FBI infiltrate the volunteer Friends of Attica, and cynically discrediting the pathologist who made findings about the deaths that didn’t fit with the State’s script. Perhaps there was also some untainted prosecution evidence, but it may have finished up on the cutting room floor, for artistic reasons.

Anyhow, Shango is acquitted. A self-educated man, he is dignified and vindicated. His mom is proud and relieved. His lawyer is feted. Hooray! Thirty years after the event, Attica would seem to have continued to burn so strongly into the liberal American consciousness that films like this were still needed to assuage the collective guilt. I guess that’s a good thing.

It’s not a prison movie, despite the riot at the heart of it all. We are regularly taken back to the uprising through potent black-and-white flashbacks which do well in conveying some of the drama and the horror. We see virtually nothing of the prison in which Shango still lives, although we do get glimpses of the attitudes of the guards who have to manage him; the memories cut deep on both sides.

As courtroom dramas go, it’s satisfying. As a look at the Attica experience, try Against the Wall (1993) instead. 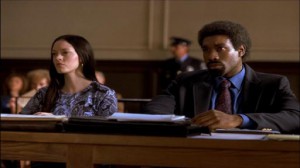 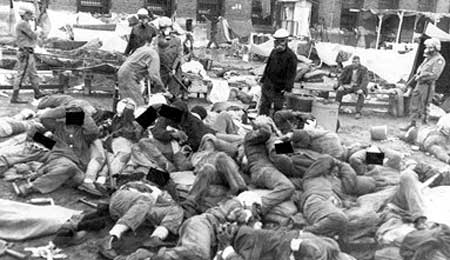