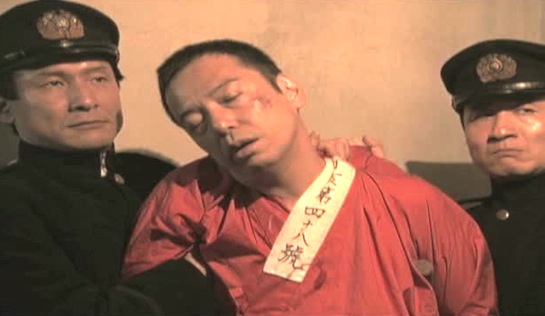 I can’t recall another prison movie in which the main character says not a word throughout the whole film. Well, not one made after 1929, anyway.

But that’s the way it is with escape artist extraordinaire Masayumi Suzuki (comedian Itsuji Itao, who also writes and directs here). He is a small-time criminal in the 1920s and 30s, known as ‘Upside-down Mt Fuji Criminal’ (due to a tattoo on his chest), who extends his meagre sentence by continuing to escape… incrementally up to 76 years and then, after his 10th or 11th escape, to a life sentence after a court decides it has had enough.

Suzuki is a little odd. Enigmatic. Indeed, it seems that he might be similar to Bronson, delighting (silently and inwardly) in the artistry of escape, just as Bronson revelled not so quietly in his own theatre of violence. We don’t know why he escapes; he doesn’t say a word. But he infuriates his captors, whom he makes look foolish as he escapes from even the toughest cell, the toughest prison – and they beat him mercilessly. He breaks free from ordinary handcuffs like they never put them on him, so they put big mechanical cuffs on him that cut so deep into his wrists that maggots feed on his exposed wounds. They suspend him from the roof. It’s a wonder they don’t kill him.

Suzuki’s also enigmatic because despite being confined in tiny cells and eating virtually nothing, he manages to maintain levels of fitness and power and agility that allow him to jump and climb like a Ninja. And he’s also a little weird because despite breaking out with ease and ingenuity, he always heads straight for the train tracks, where he runs until he is caught within minutes… and is then subjected to beatings more horrible than the last.

It’s not until he is transferred to the supposedly impregnable Prison Isle – featuring the same sort of natural attributes as Alcatraz and staffed by boorish guards who refer to the prisoners as ‘dirt’ – that an old prison warden, Kanemura (Jun Kunimura), who has since been promoted to a desk job in the Ministry of Justice, realises that Suzuki has been systematically engineering his transfer there to rescue his father (whose tattoo he has mimicked and who he recalls from childhood being pursued by prison guards down train tracks), who is an old man detained there.

And it’s at that point that the film descends rapidly into farce. Suzuki escapes from a special escape-proof contraption, grabs one of two enfeebled old men in the infirmary and straps him on his back as he uses a massive, hastily-home-made hang glider to fly off the island… but neglects to check whether the grinning old man he has abducted is the one with the Mt Fuji tattoo on his chest.

There is a suggestion that the film is based on a real-life escape artist whose exploits gave him folk-hero status. Not surprisingly, if it’s true. It should give lovers of escape movies value for money; he crafts exotic escape tools such as a tooth shaped into an Allen key to remove his handcuffs, and after each beating dribbles blood and saliva onto screws to weaken them with rust. And if you like that sort of thing, there are nods here and there to other great (and not so great) escape films like Escape from Alcatraz (1979) and The Escapist (2002).

Entertaining, in its own quirky Japanese way.