The Last Castle has many of the hallmarks of a Shawshank; a classic battle of strategy between principled prisoner and corrupt warden, an imposing prison setting (the magnificent, fortress-like Tennessee State Penitentiary), and similar production values. But it doesn’t quite have the same impact… maybe because its message is a little muddier.

On one side of that battle is a decorated three-star General, Eugene Irwin (Robert Redford), court-martialled after disobeying orders and ignoring intelligence on a dangerous mission, his actions leading to the loss of eight of his men’s lives. He has pleaded guilty and received a ten year whack, but remains a revered leader. On the other side is Colonel Winter (James Gandolfini), the warden of the military prison to which Irwin is sent. Winter is also petty and full of inadequacies, a collector of military memorabilia, and an unabashed fan of Irwin’s… at least until he overhears his hero remark in his office, “Any man with a collection like this is a man who has never set foot in a battlefield.”  Winter falls very quickly out of love.

The prison doesn’t appear too brutal, but Winter’s out-of-love punishments are. One prisoner is made to stand out in the rain for hours; others are fatally shot in the head with rubber bullets for as little as refusing to hit the ground when ordered to do so. Irwin himself is made to move a pile of stone blocks to the point of exhaustion, and then move them back again. Winter also orders the bulldozing of a wall the prisoners built from those blocks, simply because they were invested in it and proud of their achievement. His leadership approach does not immediately suggest that he has been a faithful Irwin devotee.

Irwin, meanwhile, tells everyone that he just wants to get his time done quietly, but he can’t help being statesmanlike and accidentally revealing his inspirational leadership qualities. We also know that he is a whiz at strategy because he plays chess. He is so disgusted at Winter’s management of the prison and mistreatment of the men that he tells him to his face that he’s not fit for the job. And, knowing that a warden can be removed from his post if he loses control of the prison, sets about mobilising all the prisoners to seize control of the facility through a massive riot.

In doing so he restores self-respect, pride, discipline, unity and patriotism in his disgraced colleagues – by making them soldiers again. And to a man they follow him.

The riot, designed to bring down the warden, is pure action fantasy. Petrol bombs magically emerge from hiding places and are placed in giant slingshots and slung at guard towers. Chains are conveniently found and used to lock gates and prevent guards from entering the yard. A mediaeval catapult is wheeled out to fling a giant rock (bearing the name of a prisoner shot down by a tower guard) through the warden’s office window. Meal trays are used as shields against batons, bullets and a water cannon. And a grappling hook is used to gain access to and commandeer a helicopter. Hmmm.

The collateral damage? Plenty of prisoners seemingly die following Irwin’s lead. Others no doubt destroy any chance of imminent release through their participation in the riot. The prison is reduced to an ugly battlefield. With Irwin’s skills and abilities, was there another way that he could have deposed the warden or otherwise brought about change?  One suspects so.

Indeed, the sacrifice of prisoners’ lives immediately recalls the mission which landed the General in jail. The film could dwell on this apparent flaw in Irwin’s character, his recklessness, his pursuit of a flashy short-term victory at the expense of long-term benefit and the lives of those under his command. But it doesn’t; he somehow remains a sentimental hero, while the odious Winter is further vilified (with just cause, admittedly).

It’s a film that can sweep you up in the emotion of seeing Winter get his comeuppance, but on reflection leaves some lingering doubts and questions… despite the solid performances of Redford and Gandolfini, the classic power struggle, the perfect prison setting and some reassuringly familiar markers of prison life. Entertaining. 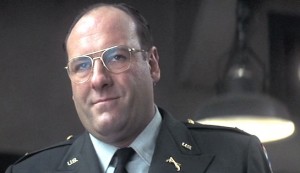 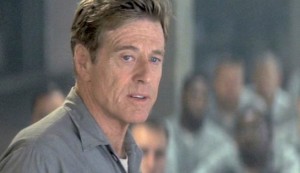