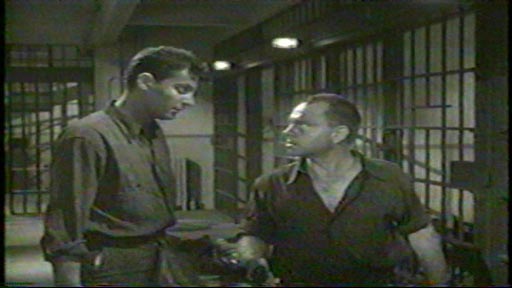 This is a pretty faithful remake of the 1932 film of the same name.  It is better, but you wonder a bit why they bothered to do it all again.

Mickey Rooney, this time, plays the raging John ‘Killer’ Mears. And does it beautifully. Clifford David takes the role of Richard Walters who, along with Mears and six others, awaits the electric chair on Death Row. In the original Walters was innocent; here he simply claims the killing was ‘an accident’, and we can devote all of our energies into sharing his anguish (as he waits to hear whether he gets a stay of execution), rather than worry about whether he will be exonerated before it’s too late.

The film opens with an odd note about how the film is ‘based on an actual incident’ years ago, but also how the treatment of prisoners and the selection and training of prison guards has improved enormously since that time. That’s reassuring. Drake (Donald Barry), the prisoners’ main keeper, taunts them with regular reminders that they’ll soon be ‘burning’ and his colleagues almost all seem intent on inflaming tensions. When Walters is dictating a last letter to his mother, Drake says, “You want me to send (it by) singing telegram?” which is enough for Mears, in the adjoining cell, to reach over and strangle him through the bars.

Mears grabs Drake’s keys and releases all but one of the other inmates. They overpower the guards in their office, take their firearms, take them hostage, and then engage in a protracted gun battle with guards in the towers. It’s an interesting battle. The prisoners somehow rip the bars off one window so that they can throw Drake’s body out into the yard from the first floor after Mears executes him; no mean feat when you consider that the door from the cellblock goes directly out into the same yard. Several of the prisoners lose their lives in the gunfire, and Mears kills several more of the guards, including the Warden’s brother-in-law after the Warden refuses to make a deal to free him (fearful that prisoners around the country will take hostages if Wardens are prepared to negotiate for the release of certain staff).

Walters is shot several times by the tower men after preventing Mears from also killing the priest, Father O’Connors. Walters was entitled, I think, to be a lot less generous to the good Father who, after earlier hearing his confession and being clearly needed by a penitent but scared man due to die in an hour or so says, “I’ll be back in a while to give you Holy Communion” and leaves him all alone. Walters pleads with Mears to finish him off: “I don’t want to wait to die (again).” Mears obliges, then, rather than give himself up to face the chair, walks out into a hail of bullets.

Like the original, this version is stagy and much of the dialogue is pretty stilted. I can’t remember Jimmy in Cell 2 saying, “You know it’s funny, I never had much to do with electricity before, ” in the 1932 flick… but he may have. Like its predecessor, it’s unashamedly anti-death penalty despite the very violent actions of which the men have been convicted and the further violence to which they are arguably driven by a brutal system.

I don’t think there’s any need to do a third version. 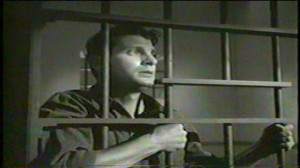 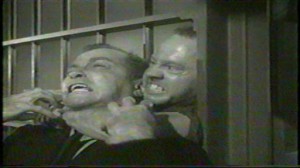