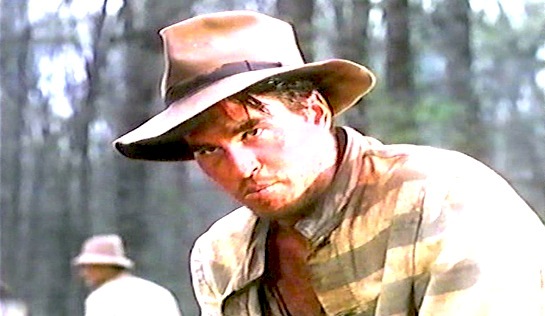 We know that this is a great, real-life story. But why the need to retell it?

I presume that there are two reasons: to bring it to a new audience who may have never seen (and will never see) I am a Fugitive from a Chain Gang (1932) – an early classic which I once had the temerity to suggest was just a great film, and not a great prison film – and to provide an update on what happened after 1932 to the man on whose life the film is based. Sadly, it pales beside the original and the second reason is pretty much ignored.

It is, of course, the story of Robert Elliot Burns (Val Kilmer in this version), whose ‘Robert’ is largely silent, and for whom in this movie the extra ‘t’ in Elliott is idiosyncratically dropped from what seems to be the conventional spelling. Burns, a WWI veteran, returns home from the war with a touch of PTSD and can’t find work. He heads to the South where he naively joins another drifter in robbing a store in Georgia (the film suggests unwittingly and at gunpoint) in 1922 and winds up with 6 to 10 years hard labour. Hello, chain gang.

Burns resents his sentence, bears some animosity towards his 13lb shackle, and strongly disapproves of the treatment dished out – not only to him (and not just after he spends some time in the box out in the sun), but more particularly to one of his fellow prisoners who is suspended upside-down and flogged for dogging it… and is later carted away in a coffin. He might also be getting weary of Warden Harold Hardy (Charles Durning) and others calling him ‘Yankee’. So he escapes after getting some help in loosening his leg irons, gets clear thanks to some easily-deterred bloodhounds, and heads north to Chicago. It’s 1923.

There he rents a room under the name of Eliot Roberts from a lady of unexplained wealth, Emily Del Pino Pacheco (Sônia Braga), who fancies him straight away and funds his dream venture into magazine publishing. In time Emily chances upon his writings about the chain gang and he marries her soon thereafter under some blackmail-tinged duress. Mr Roberts duly becomes a pillar of Chicago society and a miserable but rich and successful businessman… until he meets a young waitress, Lillian (Kyra Sedgwick), falls in love with her, and tells Emily that he wants a divorce. By coincidence, soon afterwards the authorities arrest him after a tip off, the arrest sparking lots of debate about whether it makes sense to return an obviously reformed man to jail. He ultimately agrees to go back to Georgia in June 1929 on gaining a written assurance that he will serve only 45-90 days as a trusty before being paroled.

Oops. Georgia had its collective fingers crossed and once he is there he is treated even more brutally by Warden Hardy and his parole is denied. His brother Vincent (James Keach), a priest, smuggles him some money which he uses to buy some assistance from a local farmer – and he escapes again, in September 1930. He lives a difficult Depression-era life, forever on the run, moving from town to town with a typewriter on which he writes a bestseller, I am a Fugitive from a Georgia Chain Gang! We see him sneak into a bookstore just to hold his newly published book, and then sneak into a cinema to see himself portrayed by Paul Muni in the screen version in 1932.

But we don’t see him being pardoned in 1944 (according to the film) or 1945 (according to other sources). It seems that this 1987 film version chose to retain some of the flavour of a desperate life, always on the run, that was so haunting in the original film… which becomes less impactful when you learn that Burns was not extradited back to Georgia when rearrested in New Jersey in 1932, or that he was able live the last ten years of his life a free man. Or that the groundswell of public opinion in his favour is credited with the closure of the Georgia chain gangs (which we do see).

It’s not a great film; not helped by it being a drawn-out 2¼ hours. Unfortunately, Kilmer’s Burns is intense and unlikeable, and the 40-odd minutes when he is Mr Roberts in Chicago (in-between prison terms) are execrable. Durning’s Warden Hardy is a more compelling (if stereotypical) character; full of nastiness, vindictiveness and a fierce pride in the South which makes him specially intolerant of anything from the North – whether that be individuals who offend against the good people of Georgia or politicians who try to tell those good people how to do their jobs.

Based on the real-life Burns’s experience, the film could, I think, have constituted a powerful statement against inhuman chain gangs (not so much needed in the late 1980s) and for prison reform. While I’m far from an advocate for chain gangs, it’s very tempting to conclude from what we see here that it was not the chain gang per se which was the problem, but the way in which it was run: the extraordinarily long hours, the sadistic guards, the brutal punishments, the awful food and so on. It missed the mark.

It’s with regret that I admit that the most entertaining part of the film for me was one of Hardy’s principal guards, a repugnant bigot with a weird haircut for the 20s and 30s, whose name is Boss Man Trump. That and Taj Mahal leading the gang’s work songs. There’s little else to get excited about. 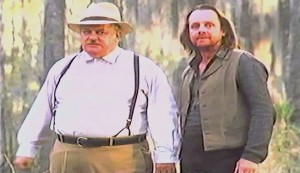 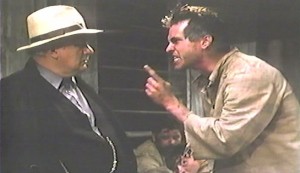 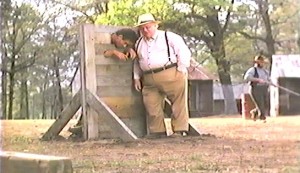 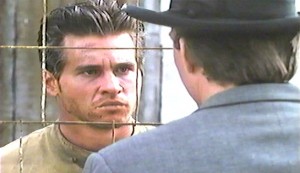