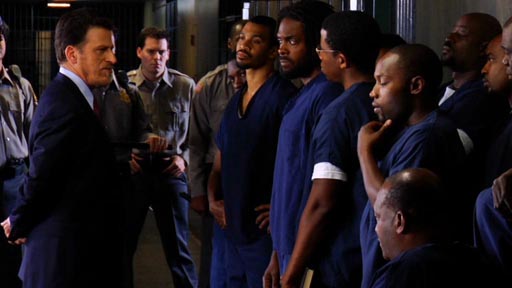 If you can get past the notion that a prison guard can be stabbed to death and then, rather than have it investigated by the Police, the Warden is able to brutalise twelve prisoners for six months in the hope that one of them will falsely confess to the killing, you may well enjoy this film.

If you can get past the notion that the corrupt Warden would want these twelve prisoners, supposedly the best connected, most influential in his prison, all detained in the small East Wing of the Mannsfield State Penitentiary in Massachusetts so that he can get his kickbacks more easily – rather than out in the general population where their market would be much greater and his cut much greater as a result – then you may like it even more.

If you can get past the notion that these well-connected prisoners and the dead guard’s widow, between them, could not excite a bit of interest in having her husband’s killing investigated, then you’re better than me.

The twelve include assorted gang members, murderers, drug traffickers and other heavies. Amongst them is Ali Ben Jahid (Aaron D Spears, who also wrote the screenplay), a lapsed Muslim arms dealer who strikes up an unlikely friendship with Officer Mike Barron, which doesn’t go down well with the other eleven.

Into the mix is thrown a single white prisoner, Andrew Perryman, whose politically-connected father is happy to pay Warden Lockwood $50,000 each month of his son’s 18-month sentence to preserve his safety. Lockwood gets the word out (with inimitable viciousness) to the East Wing: leave the kid alone. They agree, because the Warden’s complicity is crucial to their own business dealings.

But Perryman himself is not convinced that he will be left unharmed. He hears another new arrival being raped and assumes that he will be next. He arms himself with a shank and, suspecting that Monsta, the biggest of the gang members, is coming after him, drives the blade into the man who has just entered his cell – only to find that it is Officer Barron. Oops.

Warden Lockwood promptly has the kid spirited away and covers up his role in the death. He has the twelve thrown into solitary. Some are tortured. He wants one of them to take the rap; none will.

When they are let out after six months, they are different men. Whereas there had previously been the odd tension in the group (as evidenced by Ali stabbing Monsta in the eye, for example), they are now staunch – united by their refusal to break in the face of the Warden’s intimidation and torture. And it is as a united twelve that they plan their final resistance.

The film does have its redeeming features. Spears is engaging, Foster is wonderfully despicable in a cartoonish sort of way, and LA’s Lincoln Heights Jail provides a decent backdrop.

But its flaws overwhelm all in the end. If you can get past the notion that every one of Mannsfield’s other guards would stand behind their corrupt Warden and would be happy for the truth about their dead colleague’s death not to come out, then there are many other similarly ludicrous prison movies made just for you. 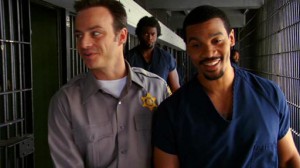 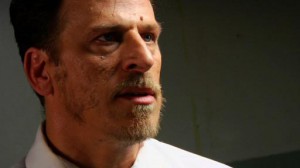