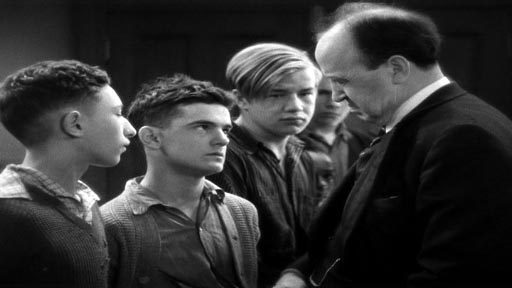 The premise is an interesting one: treat reform school delinquents as responsible young men, and they will respond accordingly. It makes for an enjoyable film, but probably doesn’t work quite so well as a blueprint for running reform schools… in 1933 or now.

How refreshing it is, though, to see age-appropriate child actors playing the roles of children. The pick of them is 15-year-old Frankie Darro, who plays Jimmy Smith (the leader of a gang of five young hoodlums sent to the Peakstown State Reformatory) with a wonderful sneer, a burning hatred of authority and a defiant, insubmissive attitude.

The reform school is run by the unscrupulous Thompson (Dudley Digges), who looks more like a banker than a reform school superintendent. Thompson has the boys marching double-time and skims money off the food budget.

Along comes Patsy Gargan (James Cagney), a mobster put on the payroll as the reform school’s Deputy Commissioner for the political influence he brings with him. Gargan has no intention of doing anything for his money – until he sees the boys being ill-treated and falls for the beautiful nurse, Miss Griffith (Madge Evans). It doesn’t hurt that he too was raised in the slums, and sees himself in some of the kids, either.

Gargan is not only captivated by Miss Griffith but is captured by her vision of a truly reforming school. He uses his political clout to take over. He implements all of  Miss Griffith’s ideas, and a few of his own. He gives the lads decent food. He advocates self-regulation (William Golding’s Lord of the Flies was still 21 years away) and appoints office-bearers – a mayor (Jimmy), a chief of police, a judge… and so on. Those appointments made, he fires all the staff. They all depart without protest… other than one good man who asks to stay on. “All the guards have to go for the present,” Gargan tells him. “OK,” says the retrenched man, and meekly walks off. All that stuff about jobs being hard to get in the Great Depression was obviously nonsense.

The new way works beautifully. The boys govern themselves maturely… and then Gargan has the misfortune of shooting one of his racketeering gang and has to flee interstate for a bit. Thompson seizes upon Gragan’s absence and undoes all his reforms. He sacks Nurse Griffith, but then has a bit of a setback when he throws a sickly kid in the cooler and the kid dies. The boys rise up against him and, in sudden possession of a score of fire torches, riotously set fire to a barn onto which Thompson has fled in fear. He dies.

Gargan returns, abandoning any concerns for his own welfare, having been alerted to what’s happening back at ol’ Peakstown by Miss Griffith. He restores order. They embrace. Several hundred young hoodlums revert to being respectful, mature young men. All is well. 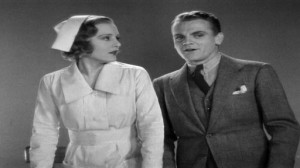 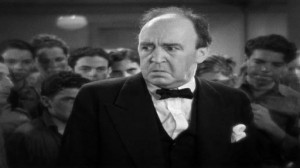 If you’d like to get a better appreciation of the film’s political context, you might want to check out Goatdog’s helpful review.