It’s an extraordinary story, this one: based on the real-life story of Clyde Thompson who collected three life sentences, found God in jail, and became a prison chaplain after his release. Maybe because it’s sympathetic to him from the outset, maybe because it is so mindful of its likely audience that the portrayal of his pre-redemption ugliness is never too graphic, or maybe because Clyde never looks anything but boyish – but the message of his transformation is not as powerful as you might imagine; preaching to the converted has its downside.

At just 17 Clyde (Mateus Ward), the son of a lapsed preacher, is sentenced to die by electric chair. The death sentence follows him being goaded by two Welsey brothers into shooting two O’Dell brothers, who are unknown to him and unarmed, on the pretext that the men had made offensive comments about the Welsey brothers’ sister, whom Clyde fancies. The Welseys, one older and one younger, who bash the men after they have been shot to make sure that they are dead, would seem to have some other beef with the O’Dells.

Clyde is guilt-ridden and readily confesses, and the younger Welsey gives false evidence against him – so he is always going to fare worse than his accomplices. It’s 1928. Despite the community outrage (he is branded ‘The Kick Killer’), his sentence is commuted to life imprisonment. He’s sent to a prison farm run by a tough, no-nonsense warden (is there any other kind in these movies?), Captain Jack Colt (Jamie McShane). The prison is orderly. The work seems to consist almost entirely of hoeing bare earth. And if you are not fully on board with the message that this is a brutal prison and Clyde is a proud, recalcitrant young man who will never allow himself to be beaten or broken, the rest of it has a schoolyardish or vaguely homo-erotic feel (regular whippings of bare buttocks, and neat – and impractical – white and taupe uniforms).

Although he’s an unlikely first-time murderer, Clyde’s not done with this killing business. After a thwarted attempt to escape from the prison farm (and to honour a promise to one of his fellow would-be escapers who dies after being gunned down), Clyde kills the prisoner who alerted the guard to the escape bid, and wins a second life sentence. Then he kills a nasty, predatory prisoner who makes an error of judgment in declaring his intention to impose himself sexually on a man who has killed three people and is not fussed at the prospect of a fourth; a third life sentence follows. He is given the tag of ‘The Meanest Man in Texas’.

Three life sentences is apparently enough, and he is sent to solitary for 5½ years; placed in a concrete bunker that used to be the prison’s morgue. Captain Colt visits him to remind him that he will be broken. Clyde asks for a bible to break the monotony and prove the hypocrisy of believers, but in the gloom of his bunker unexpectedly develops a strong faith. He scratches random inspirational words or phrases into the walls, and becomes the first and only person ever to gouge the word ‘begat’, on its own, into a prison cell wall. He completes correspondence courses in theology and journalism, and Captain Colt starts visiting him to have friendly, respectful man-to-man chats.

Meanwhile, Julia Perryman (Alexandra Bard), an unemployed, dowdy, directionless young woman with scoliosis, is encouraged to write to Clyde by her local church… and a relationship develops. As Clyde is moved to the penitentiary at Huntsville she rapidly blossoms into an independent photo studio owner who has an enviable collection of expensive and fashionable outfits… and a fiancé who has been in jail for 20 years and may never get out.

Clyde preaches the gospel to his fellow inmates, is sent back to ol’ Captain Colt’s prison and never gives up hope. Nor does Julia. He is rather surprisingly paroled and marries Julia five days later. It’s 1955; he has served 27 years and looks 15 years younger than his 45 years; prison has been good to him. “You got any regrets?” drawls Captain (now “call me Jack”) Colt. “Eight men died so I could live [he includes those killed in the escape attempts he led]; that weighs heavy on a man. [But] no. No regrets.” Really? None, Clyde?

To go with this weird regretlessness, it is an oddly passionless film. None of it seems quite real: from the smart 1928 prison uniforms, to the two-hour contact visits, to the whole of Julia, to the warden assisting Clyde to ‘dress for success’ when he is released and talking of inviting him round to his place on a weekly basis. Sadly, Clyde’s conversion and early preaching also come across as awkward (sad, because that awkwardness might be absolutely authentic; why would he be polished?) and unconvincing. Did I mention the bizarre warden-prisoner relationship? I may have. 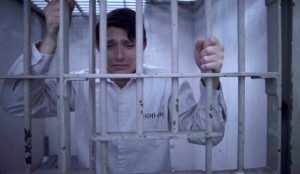 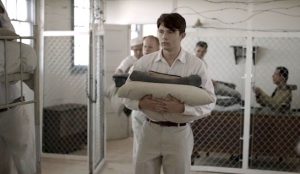 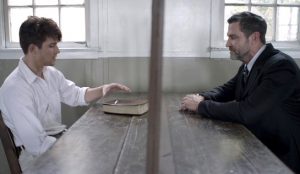 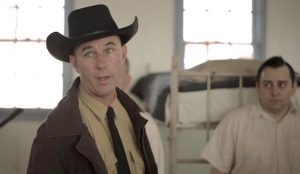 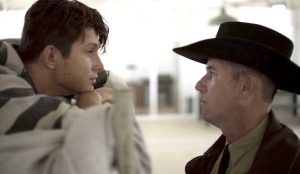 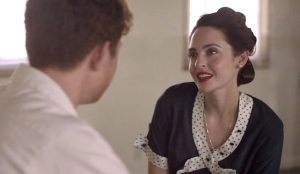