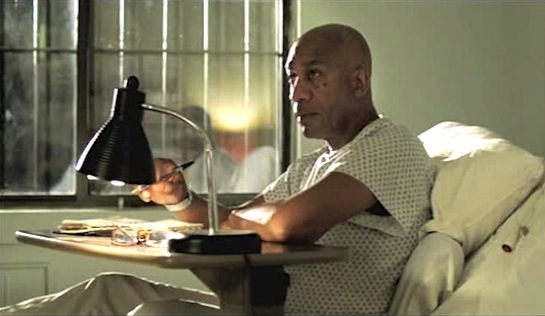 Mickey Loren (Louis Crugnali, who also wrote the script) is troubled. He’s been out of jail for several years, but is still haunted by the drunken accident in which he killed his ‘blood brother’, Anthony. He drinks too much, continues to drink and drive, and has come perilously close to breaching his parole.

Mickey still lives unhappily with his parents near Providence, Rhode Island. His father, Mike (John Fiore) has been a proud prison guard for 23 years. Mike is old school; loud, combative, and a man who takes delight in stories of the physical confrontations he has had over his career. He is also a man who is supremely confident of the rightness of his views on all things, including those about which he knows nothing.

As part of his community service obligations, Mickey has been working as an orderly at the local hospital. It’s there that he encounters Sam Freeman (Joe Morton), a lifer who has been transferred there from prison to die with dignity. Sam has been in jail for 26 years, ever since he murdered a high school principal when he was 18. He has done all his growing up in prison, and concedes that he could have done with some guidance from an older, wiser role model; instead, he says, “I dedicated myself to being hard”. But now he’s dying, having contracted HIV from drug use in prison.

Unbeknownst to Mickey, Sam and his father share some history, including Sam having badly assaulted Mike years ago; Mike still bears the scar. And now Mike is asked to guard Sam in the hospital. Although Sam is on his last legs, Mike approaches him with a belligerence that has no doubt been a feature of his whole career, and still seeks to hold him to account for the life he’s led. “You live your miserable fucking life. You did what you did. You ended up where you ended up. Then you find God, Allah, whatever.. and all of a sudden your shit don’t stink, uh? Special meals and hunger strikes… complaining about your civil rights. Is that what this is all about?” he asks. “If that’s what you think,” says Sam, wearily. “It’s not what I think, Sam,” Mike barks back. “It’s what I fucking know!”

Mickey, on the other hand, wants to engage with the dying prisoner. He’s curious, but is also doing a creative writing course and has been asked to write about someone interesting. Sam (at least initially) treats Mickey in the same adversarial fashion as Mike treated him.

Meanwhile, Sam’s daughter Marie (Daniella Alonso), whom he hasn’t seen since she was two, is prevented from visiting her father in the hospital. Why is not clear. She sees Mickey there, though, and approaches him later in a bar with a view to finding out more about her father. Later, they hook up, improbably. Even Mickey finds it improbable; he is a guilt-ridden, lost, ex-con and she is a young woman of staggering beauty who seems to have it all together. She withholds her connection to Sam from him.

It’s through the three men, though, that we’re invited to consider the choices that people make. Mike, for example, wastes no time in reminding Sam of the terrible choices he has made in a rather pathetic, desperate effort to reinforce his moral superiority. But he doesn’t need to; Sam is not without insight, has done a lot of thinking and knows that he’s made some very stupid calls – the murder and the decision to start using drugs not the only ones.

Mickey, a man who has also made some bad choices, is drawn more and more to Sam and seeks to better understand his story. It emerges that the motiveless, ‘execution-style’ murder of the school principal for which he is remembered scathingly by the correctional authorities occurred after Sam found the man sexually abusing his younger sister, who went home and hanged herself. Mickey knows that there is less honour in causing the senseless death of your best mate.

In the midst of all this, one of Mike’s work colleagues is stabbed to death by a young prisoner, who in turn dies several days later from the effects of the force used to restrain him. Mike, the self-proclaimed paragon, finds himself under official investigation for using excessive force; his own choices critically questioned, probably not for the first time. He is unlikely to get sympathy from his son, whose little respect for his father is due in part to his father’s use of force at home against his wife.

But Sam’s imminent death brings about some reconciliations, of sorts. Mike ultimately forgives him for his actions all those years ago (although not in so many words), and even starts to treat him with some compassion.

Mickey, who has never felt good enough for Marie, lets her slip through his fingers after a fight in a bar defending his alcoholic, mentally-ill uncle. He winds up in jail for the night, and decides that it is about time he put the past behind him and took control of his life. He contrives to reunite Marie and her father, having learned belatedly of their connection, as Sam is slipping away. And he resolves to move out of home, away from his father, and to move on with his life.

It’s like a very delayed coming of age; one that Sam never got to experience in the community. This one, however, is very much informed by him.

This is an excellent film, with a compelling performance from Fiore as Mike at its heart. It deserves to be much better known.