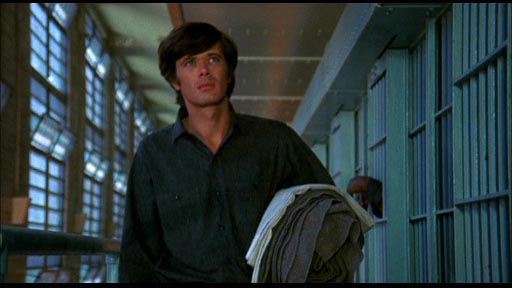 Some films are timeless. This isn’t one of them.

We start with the dreamy William Popper (Michael Sarrazin) playing with his model boat, betraying a privileged upbringing, a lack of maturity, or both. We learn that he’s a college boy from a wealthy family, has renounced all that his money can buy (although his fervour for activism seems to be waning), and is living with a Jewish girl, Jane (Barbara Hershey), in a very modest little apartment in New York.

He sets out for his father’s place one rainy night (after rather churlishly refusing to support Jane at one of her political meetings), and knocks over and kills an elderly pedestrian. It is a pure accident, but either because it is his lifestyle that is on trial, or because his licence has expired, his car has bad brakes and bald back tyres, and he has 22 unpaid parking fines (exposing him as a person who has no regard for the rule of law), he is charged with vehicular homicide.

The family money comes to his aid. His lawyer uncle expresses disappointment that he hasn’t shown sufficient remorse at the scene to be noticed, and coaches him how to not come across as a flaky liberal in court. William protests about money buying justice and talks about refusing to co-operate and wanting to just speak honestly about his role in the accident, but in the end he wears a suit and plays the game. He still gets a year in jail, however – those 22 parking tickets sealing his guilt.

In prison he shares a cell with a disgraced senator, James Moran (David Doyle) and is befriended by a gay African-American, George Wilson (Gilbert Lewis). This latter friendship is frowned upon by the other inmates, and when George gets stabbed in the showers for showing too much interest in another prisoner’s son, William’s position becomes less comfortable.

The whole prison experience becomes even less fun when, as a witness under examination at the subsequent court case, he has to put up with a series of inferences that his friendship with George was more than a friendship. He is exasperated at the system and less than gruntled at his part in it. Although he only has a week to go before his appeal, he chooses instead to escape, bolting out of an open toilet window at the courthouse.

Is the escape a spontaneous expression of free will, a refusal to be bound by the Establishment’s rules that all point to his imminent release upon appeal, or an immature cop out?

As he begs for help from his wealthy, bigoted grandmother and uses her right-wing money to evade capture and buy his way out of the US, one suspects the latter.

Some films carry a memorable message. This isn’t one of them. 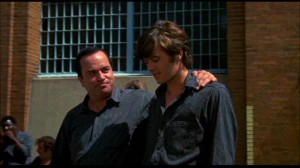 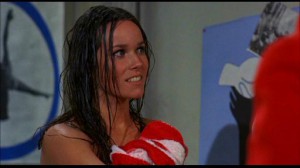