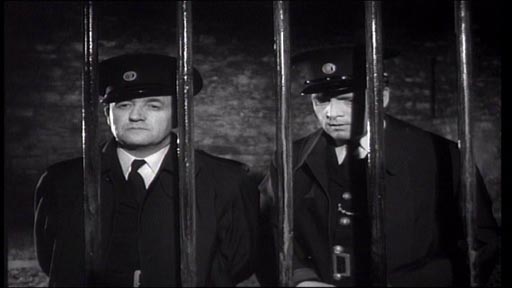 When the notes accompanying (and presumably promoting) the DVD include a review which concludes with the line, “While I wouldn’t recommend you to go too far to see it, it is nevertheless worth seeing”, one’s hopes aren’t lifted too high.

The chief difficulty with the film for that reviewer was that it is so very different from the acclaimed Brendan Behan play on which it is based. And it is. At the start of the action there are two ‘quare fellows’ (prisoners awaiting execution). One is reprieved but unable to face the prospect of years in prison and hangs himself, and the whole prison’s attention turns uncomfortably to the other man, whom we don’t see until the last few minutes but whose presence pervades throughout. He has butchered his brother, we’re told, and probably lacks the political influence to gain himself a reprieve. The film invites us, in a way that the play doesn’t, to live the story through a newly recruited warder, Crimmin, who begins his career with an unwavering view about crime and punishment and a certainty that if a man is due to be executed then he must deserve it. He is gently schooled by Senior Warden Regan, a dependable, experienced campaigner who has seen too many hangings and is not averse to reminding his bosses of the barbarism of State-endorsed murder. And then Crimmin, who has inadvertently taken up board with the aunt of the quare fellow’s wife, Kathleen, finds himself having to confront the human side of the death penalty.

Crimmin’s consoling hug of a drunk, screw-hating Kathleen (rather-too-easily) becomes a quick fling, just as he learns that her husband killed his brother after finding him also consoling Kathleen. In bed. Together. Soon the whole of Dublin knows they’ve had it off together, though how is not clear. Oh dear. We all know, of course, that Crimmin will be required to support the quare fellow in the hours leading up to, and at, the execution – and we look forward to the awkwardness of that moment.

The film unashamedly argues against the death penalty. It does so without much of the humour of the play, and instead of using the fellow prisoners’ commentary as a backdrop to the main event, introduces the novice Crimmin and the guilt-ridden wife, as well as the moral centre, Regan, to push the message home. It’s a different era. The prison is full of old lags and Dublin is like a small town where everyone knows everyone else’s business. Prison Officers are called upon to rub liniment into the old lags’ rheumatic legs, and do so. And while Kathleen gets into a fight with another prisoner’s wife for bedding a screw, Crimmin doesn’t seem to suffer any consequences at all. Some of that’s a bit quare.