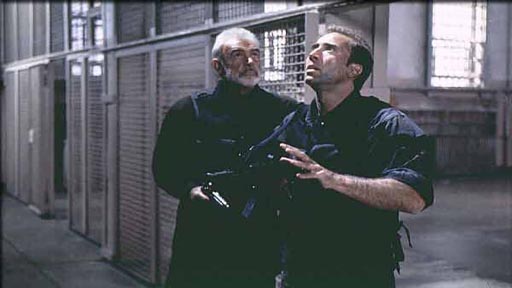 This has two critical elements of a prison movie: a prison (Alcatraz, in this instance), and a prisoner. Mind you, and I know I’m a bit pedantic and old-fashioned about these things, I do think that in order to be a proper prison movie the prison has to hold prisoners. Even one prisoner. The Rock, I’m sad to say, is not a prison movie; it’s more of a tourist attraction movie.

But it does have an intriguing premise: a disgruntled Vietnam War hero, General Francis Hummel (Ed Harris), is so outraged at the government’s refusal to pay benefits to certain war veterans’ families, and so inspiring a leader, that he is able to convince a load of loyal fellow Marines to take over Alcatraz, take 81 tourists hostage, kill US armed forces personnel, and threaten to launch deadly VX gas into San Francisco, potentially killing thousands of innocent Americans… for which his troops would get $1 million each out of the ransom money and never be able to set foot in the US again. An opportunity too good to refuse, obviously.

To overpower Hummel’s heavily armed Marines, disarm the VX-laden rockets and make America safe again, the FBI calls upon its own Dr Stanley Goodspeed (Nicolas Cage), a layabout biochemist who has expertise is in dismantling dangerous gas bombs, but never in the heat of battle, and ex-British SAS commando and prisoner John Mason (Sean Connery), pulled out of his prison cell where he’s been locked up for the past 30 years, and the only person to have successfully escaped from Alcatraz (a little known episode that the US Government has found it necessary to keep quiet). Plus a few Navy Seals who inconveniently get wiped out very early in the piece.

For all that silliness, this is far from the worst action movie I’ve seen. And it does have one important message for prison systems worldwide, which spend a good deal of energy trying to reduce the effects of institutionalisation and to bring long-serving prisoners up to speed with modern life prior to release: They need only to approach John Mason for the answer; new weapons, new technology, negotiating his way around complex problems and changing dynamics… nothing fazes him in the slightest. He doesn’t even baulk much at helping out a government that has imprisoned him without charge for 30 years. Now that’s rehabilitation.