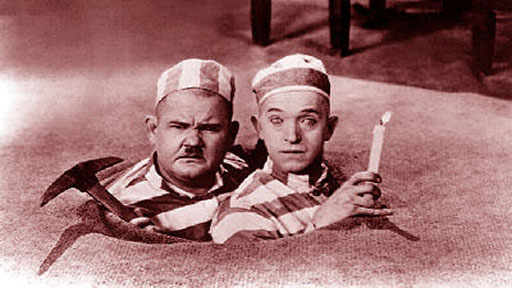 I wasn’t exactly blown away by The Hoose-Gow (1929), the only other Laurel & Hardy prison film I’d seen, but this one came with a much more promising reputation. And it opens well, with crew-cut Stan and Ollie trying to tunnel out of prison, only to come up, pick-first, through the carpet in the Warden’s office. In unsoiled, pristine prison uniforms, what’s more.

Rather than be sloughed up for trying to escape, they simply join a line of other inmates, where they are vigorously rebuked (well, Stan is more than Ollie) and everyone is made to do exercises. There is something oddly comedic about a line of men in prison uniforms with the broad, horizontal stripes; they can do anything and none of the humour would work nearly as well if they were in monochrome. Not that it works that well with the stripy uniforms, it must be said.

Anyhow, the duo manage to disguise themselves as painters and walk out the front gate of the prison, where they attempt to look natural by painting everything in the street. Chased by a policeman after Stan slaps paint on a woman pedestrian (why not before that when they are observed painting a car, shops and an African American gentleman is anyone’s guess), they jump into a limo waiting to take two visiting French policemen on a tour of the prison, steal their clothes and are driven directly back into the jail, where they are welcomed as the foreign dignitaries and evade detection for way too long. I know it was 1927, but who would have thought that with the whole film lasting only 20 minutes, you’d end up wishing that more had finished on the cutting room floor? 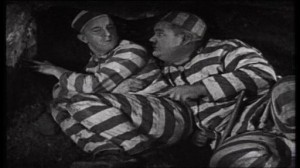 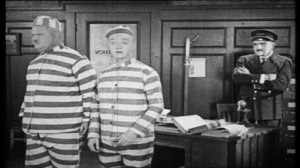