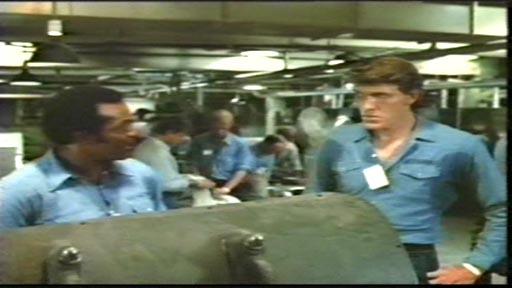 A real ‘70s action flick; tough and gritty. Jim Brown plays the handsome, stoic Curtis Hook. Hook comes to jail on some relatively minor charges, but everyone knows that he alone knows where the proceeds of a drug heist (an attaché case full of skag and $1.5m in cash) are stashed. So he’s a marked man in ‘the slams’, with everyone wanting a piece of what he’s got on the outside. We are asked to join with Hook and hope that he gets away with all the dough… which means that we have to conveniently set aside the seven drug dealers and two accomplices that he killed in order to walk away with the money.

The prison looks authentic, and probably was. It’s a tough nick. The Captain is corrupt and offers to look after Hook in return for a slice of the pie. Until they have a massive falling out, the Captain is in business with Mr Capiello, an old style crime lord – more in the British tradition – who has his own suite in the prison, wears a smoking jacket, drinks wine and runs all the rorts. No-one seems to mind. Capiello also wants some of Hook’s money and holds a contract on behalf of the robbed mobsters. There is not a single decent guard; every one of them is apparently prepared to set prisoners up, mock them, move one group of thugs after lock up so that they might attack another group, or turn away from the condoned violence. On top of that there’s a collection of nasty prisoners, led by Ted Cassidy (Lurch from The Addams Family), who work for Capiello but also do a nice line in freelance racism. The prisoners move from workshop to workshop (printing one day, the laundry the next) seemingly in order to introduce the viewer to new ways to maim others – acid and molten lead one day, bleach the next. Who would have thought that it was unsafe to give violent prisoners access to acid and molten lead?

Hook is lucky to stay alive, saved only by good fightin’ skills and the fact that he is no good to anyone dead. Then he finds out that the abandoned amusement park where he’s hidden the loot is about to be demolished… and he has to escape as he can’t trust anyone else. If the prison operations challenge one’s capacity to suspend disbelief, the escape bid is one of the better ones; audacious yet almost credible. Good fun, in a ‘70s sort of way.