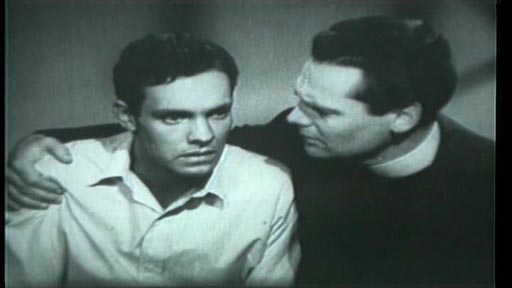 It’s a different time. The film’s opening sequence shows a trustee prisoner in a prison car collecting a young girl from a bus stop in the middle of the night. He takes her to the home of the Cragmoor State Prison Warden, where he and his wife console her. It transpires that she is the girlfriend of a young man awaiting execution for the murder of a gangsterish politician. Fair enough; I’m sure lots of Wardens put their prisons’ and their own resources at the disposal of Death Row inmates’ families. No blurred boundaries there that I can see.

Neither ‘the boy’ on Death Row nor his girl are named throughout the film. Perhaps all the best names had already been taken by characters in other movies. Or maybe the boy’s everyman quality would be undermined by something so particular as a name. Anyway, it seems he’s innocent, and she’s distraught.

In the diner-post office where she works, not far from the prison (so that she is able to be as close as possible to her beloved), reporters gather before being called up to the prison to cover the execution. It’s a special event, not because of who the boy is, but because it’s the first run of the newfangled electric chair, which has replaced the Cragmoor gallows. In a maudlin moment with the prison chaplain, the boy reflects on a life in which he was never a stand-out… ignoring the history that he is about to create! Nice guys sometimes do come first.

With the reporters assembled and his girl in an ante room, they flick the switch at dawn. The chair misfires, the execution is postponed, and the newspaper men all retire back to the diner… where (“Hold the presses!”) there has been another murder! One of the prison’s trustees, No. 27846 (known as ’46’ for short), who collects the mail from the post office, is sure that a bloke who frequents the diner, known as ‘Blackie’, is actually ‘Parrot’ Ferrucco, a five-time murderer known for emptying all six bullets into his victims… and who five years earlier was supposedly fished out of some waterway wearing concrete boots. Blackie may have had some impressive cosmetic surgery but 46, who was framed by the said ‘Parrot’, recognises his talk and walk. He exposes him. Without hesitation Blackie pops the six rounds from his pistol into 46, but is then overpowered by other patrons, including some prison guards who had  been – up to that point – a touch sceptical about 46’s claims.

Blackie is handcuffed and taken to the prison (where else?), where he is fingerprinted to the sound of the boy’s girl wailing nearby. The prison authorities quickly confirm Blackie’s identity as ‘Parrot’ Ferrucco, just as the execution director is calling ‘Take 2’ on the boy. With the game up, ‘Parrot’ gruffly confesses to being the real killer of the politician. Is it too late? Has the switch been flicked? The atmosphere is frankly electric!

It’s not too late. Phew! The boy and the girl embrace. The film noir offering gets a little less noir. “He is listening. He always listens,” says the chaplain, with eyes heavenward, in the event that the audience was still in search of a moral to take away. Or rather, if the moral of “Don’t kill seven people; you’re bound to get caught in the end,” is seen to be wanting in some respect.

It’s hammy, but short. Despite its focus on a bloke in prison waiting to die, there is almost nothing of the prison in it; it ain’t no prison movie.