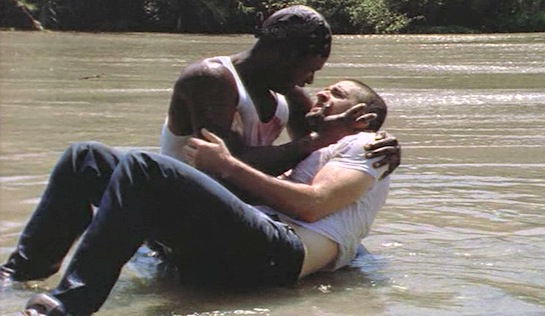 “You haven’t grown up on our streets and dealt with our pain,” sneers one prisoner when the prison counsellor challenges his class about dealing with conflict other than by violence. “You just don’t get it,” says another. “Who really just doesn’t get it?” snaps the counsellor, and storms out of the class. It’s the sort of low budget movie where you brace yourself for the whole wall wobbling when he slams the door on the way out.

Now, the prisoners don’t realise that the counsellor, Nick ‘Taka’ Takalano (John Nicolazzi), has some skin in the game – his son (it seems) having been mown down in a gang-related drive-by shooting. Apart from being a grieving victim, he does the work of ten men in the prison: counsellor, schoolteacher, martial arts expert, guard, life coach and gym instructor, trying to turn these young Los Angeles hoods away from hoodlumming. He’s an absolute Superscrew.

You can’t accuse him of orthodoxy. He breaks up fights in the prisoners’ dorm single-handedly, brushing off attacks by several of the prisoners using his martial arts expertise, and then carries on as though nothing has happened, even though another prisoner has apparently just been found in the shower room, stabbed 20 times. He teaches his violent gang members teamwork by putting paintball guns (yes, guns) in their hands and challenging them to track him down and shoot him. He finds dust on a bunk bed and declares, “No dinner for anybody tonight!”. And he pursues a field trip for his group of prisoners, even though he has served 6 months inside himself and is still on probation after an earlier field trip went horribly wrong with four guards getting killed and none of the killers surviving.

His warden (Thomas Kappler) must rank amongst the least plausible (and least competent) movie wardens ever. “These are #@&%! animals we’re dealing with!” he shouts at Taka. “What are you doing going out behind my back and writing for another field visit? Don’t you know you’re still on probation?” But for all the bluster he somehow approves Taka’s dubious next field trip anyway… and then isn’t made aware that the group hasn’t returned to the prison despite it being five hours overdue. Yep, five hours.

The field trip clearly has deep educative intent; it’s to “play war games”. If its purpose is a little fuzzy, it’s also not entirely clear why the trip isn’t immediately aborted when one of the group is involved in a fight with the boyfriend of a girl the prisoner chats up in a diner. At least some people understand the planning, though; several carloads of Hispanic homeboys lie in wait for the bus in a forest so that they can spring one of their gang who is about to be charged with murder. But before they do, the Latinos stumble upon a large group of Satanists who are in the midst of the ritual sacrifice of a trio of straying hikers, and when the prison bus is ambushed we have a perfect storm of prison guards, prisoners, devil-worshippers and gang members all involved in a mass shootout. Which is quite hard to do when some are armed only with sticks and cleavers.

Naturally, Taka’s intensive schooling of the prisoners pays dividends. Their teamwork, fighting skills and fitness are much improved; so much so that blows that clearly don’t connect still have a devastating effect. The prisoners behave like regular solid citizens while the death cultists and homies run rampant. And in a beautiful symbol of what is possible, African-American Noa (Sammi Robiti) ends up cradling the mortally-wounded white supremacist Danny (Andrew Johnston) as he dies, the two having fully embraced Taka’s homilies and having forged a earlier bond over WordPerfect on the jail computer.

Did I say that this is a low budget affair? It’s one of those massive jails where you only ever see 11 prisoners. Danny’s defining Neo-Nazi tattoo looks like it was scrawled on his arm with permanent marker two minutes before filming began. And you get the sense that the Satanists are in a hurry to use their machetes because they will incur an overnight fee if they don’t return them to the fancy dress shop before it closes.

But it is its sheer cheesiness that is its strongest feature. “Got a balloon here,” Taka tells his class, blowing it up. “In this balloon exists energy. If it’s not controlled,” he says, letting it go, “it can be lost. Like you.”  You could be forgiven for thinking the silence with which this is greeted is mere disinterest, but it is clearly the sound of all the energy being controlled.