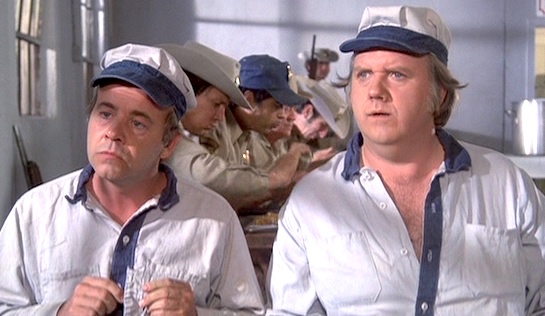 It doesn’t bode well, does it, when a film needs a wacky long title to entice you to watch it.

Tim Conway wrote and stars in this slapsticky comedy about two bumbling small town cops who are invited by the Governor to go undercover at a prison farm. Twelve years earlier the Governor had prosecuted an armed robber named Butch Collins, now about 103, who has never given up where his take of $200k is hidden. The task for Dewey (Conway) and Wallace (Chuck McCann): find it. In one month.

The Goose Creek Correctional Institution is as you might expect a comedy prison farm to be, if slightly underdone in the stock character department. It does boast, however, an aging, ineffectual warden, Warden Warden (known as ‘Gunner’) and his younger wife (who has a range of carnal inclinations), a 7′ 2″ prisoner, Duke (Richard Kiel)… and Butch, who has now lost most of his marbles.

Dewey and Wallace are naturally as incompetent as prisoners as they are as law-enforcers. They strike Laurel and Hardy-esque poses, raise the ire and suspicion of their fellow inmates… but somehow stumble on the loot that Butch is getting sent in. They are just about to conclude their assignment when they learn that the Governor, the only other person who knew of their undercover roles, has died of a heart attack.

It would be fair to say that their attempt to convince the Warden of their plight is not met sympathetically… so they grab guns, hostages and the money and escape – hoping to convince the new Governor of the bona fides of their deal with his late predecessor. A number of other prisoners, led by Duke, who have also been hankering after Butch’s money, escape too, and race them to the Governor’s residence, where he is in the midst of entertaining the Japanese ambassador. Some mayhem ensues.

I’m not a fan of this sort of slapstick, nor of the disaster-prone, Laurel and Hardy dynamic. But there are some genuinely funny moments (notably the reprise of the dentist skit from a 1969 episode of The Carol Burnett Show, where Dewey is conscripted to pull one of the Warden’s teeth but keeps stabbing himself with Novocaine)… and many more genuinely unfunny ones.

If it went that-a-way, you can be sure that it was ultimately the wrong way. 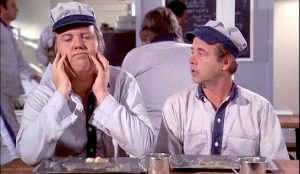 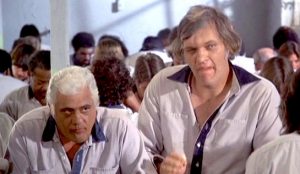 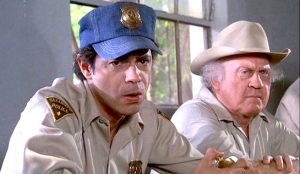 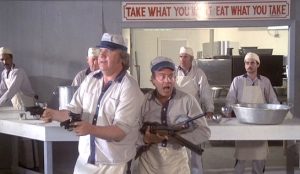 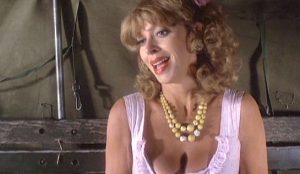 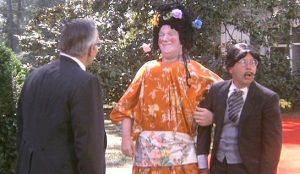