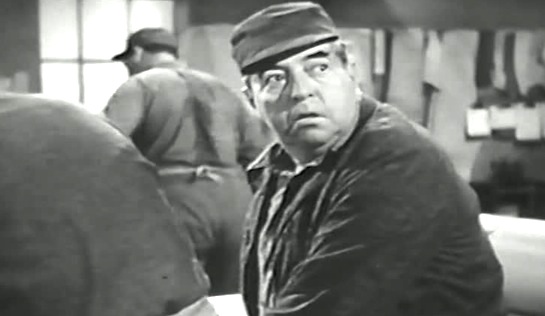 I thought that this was a variation on the theme played out in several films – including The Prisoner of Shark Island (1936), Devil’s Island (1939) and Hellgate (1952) – where doctors (and one veterinarian) treat injured felons because they’re injured, and then get charged with being an accessory. This is a little different; the small town doctor here does take a bullet from the chest of a young man (whom he had delivered 26 years previously and known all his life), but also gives him money and hides him for a few days – in doing so knowingly helping him evade arrest. So he might be a little more culpable than some other doctors in those other movies.

He arrives at what others suggest is Fillmore Prison, but I’m not sure where that comes from. It’s a prison. Dr Robert MacAuley (Walter Connolly) is an experienced, decent, much-loved doctor in his home town… but a little naive in the prison space.

He is a bit disparaging of both the competence and attitude he sees in the prison doctor, Dr Frank Norton (Onslow Stevens), and more than a little peeved that he isn’t asked to help out in the hospital. When his Polish co-worker in the tailor-shop Piotr (‘Lindy’) Lindowski collapses with heart condition, Norton administers adrenalin and, when there is no response, pronounces him dead. MacAuley grabs a syringe and gives him an inter-cardiac injection, at which the patient revives. This doesn’t hugely please Norton, but does lead to MacAuley being feted by all the other prisoners… and asked for medical advice on all their ailments.

In due course Norton succumbs to pressure and gives MacAuley a job in the hospital, but not working with patients. At least, not at first; MacAuley is reminded by Norton that he is foremost a convict, and then, when he is finally allowed to practise his medical skills, Lindy (who remains in constant pain and wishes to die), reminds him again that he is a convict – and where his allegiances should lie.

Lindy has lots of money stashed away on the outside, and offers it to MacAuley if he could “give (him) an extra shot” and put him out of his misery. MacAuley refuses, but the chief hospital assistant, Nightingale (Paul Fix) has no such qualms; he is prepared to trade an extra shot for the location of the money.

MacAuley’s former cellmate, Redlands (Bernard Nevell), a pathological liar, pressures the good doctor to admit him to the hospital. MacAuley knows that he’s not sick, at least not physically, but relents – not knowing that Redlands and Nightingale have conspired to escape from the hospital via an ambulance and then recover Lindy’s loot. In the midst of the preparation for an operation on a prisoner, Redlands confronts Norton and MacAuley, brandishing a gun… but he faints at the sight of the open wound and is disarmed and taken away.

It’s then that Lindy is found dead. In an extraordinary on-the-spot diagnosis of someone with a chronic heart condition, Norton determines that the man has probably died from an overdose of his painkillers, and suspicion falls on MacAuley – the only person other than Norton who has a key to the medicine cabinet in the surgery. MacAuley is removed to his cell, provoking uproar amongst the other prisoners. The hospital in-patients surround Nightingale in the middle of the night and torment him until he confesses that it was he who killed Lindy.

At the same time, a prisoner’s pregnant wife goes into labour in the visiting area, and Norton calls for MacAuley, who has yet to be exonerated over Lindy’s death, to deliver the baby. Norton’s extreme reluctance to be involved prompts some fatherly pushing by MacAuley, and it transpires that Norton had botched the delivery of a friend’s child; the woman had died and her husband committed suicide the next day. The tragedy, and his role in it, led him to seek work in the prison where he would have no more female patients, but the successful birth of the prisoner’s child gives him confidence to again seek to work outside the prison walls. With MacAuley’s parole, both doctors are redeemed and free to leave.

It’s an interesting picture of prison. There are rules and discipline, but essentially it is a cordial and orderly place with most prisoners doing the right thing. And the film suggests that more reform would be tolerable; MacAuley at one point has several soon-to-be-released prisoners sitting under sun-lamps to remove their “prison pallor”, and while Norton rejects it at the time, it is ultimately endorsed as something that might assist in prisoners’ reintegration.

And in the end the spirit of forgiveness pervades all. Norton forgives himself, and MacAuley leaves the prison still genial and not at all bitter at his imprisonment or treatment. And there, amongst all the other prisoners waving him goodbye, is Redlands – clearly forgiven for his armed attempt to escape and within no time at all enjoying life outside solitary.

There are some horribly inaccurate synopses of this film to be found. One claims that MacAuley has Norton’s respect “until a prison break occurs and the convicted doctor is blamed.” Not true. Another states that MacAuley is “so touched by Lindstrom’s (sic) agony that he talks over the possibility of a mercy death with Norton.” Doesn’t happen.