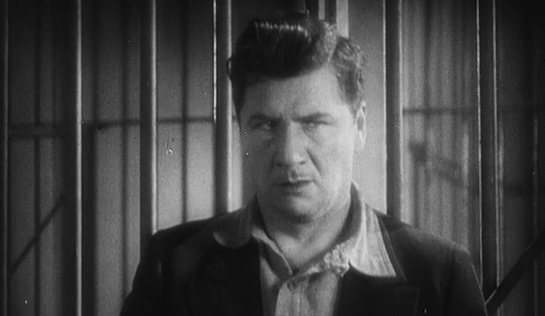 One of the early ‘talkies’, Thunderbolt can’t quite make up its mind about what sort of movie it wants to be: a drama, a comedy, a romance, a piece of early film noir…  Heck, it even shows off its synchronised sound with a few musical numbers. In the end it’s so busy it doesn’t quite cut the mustard in any genre.

It starts with a clandestine romance between a gangster’s moll, Mary, known to all as Ritzie (Fay Wray), and an ‘on the level’ bank teller, Bob Moran (Richard Arlen). It has to be clandestine because although Ritzie has had enough of gangstering after two years in the business, her gangster, of whom she has also grown weary – Jim Lang aka Jim Carson aka ‘Thunderbolt’ – still regards her as his girl and has no intentions of letting her go. Thunderbolt (George Bancroft) is wanted for armed robberies in nine States and for two murders but the Police can’t seem to find him, even when he goes out in public with Ritzie. The cops put pressure on Ritzie and Bob to rat on him, and get Bob sacked from the bank when they keep schtum.

But when Ritzie learns that Thunderbolt has vowed to kill Bob and is hunting him down, she tips off the Police. And just in time, it turns out. The hard man gangster is arrested trying to shoo away a stray dog that has followed him right to Bob’s door. Who knows why he doesn’t want the dog around? Maybe he’s worried that it will talk. Anyway, that’s when he gets captured, and the sentimental authorities allow the stray to follow him into prison (Sing Sing, it seems). Thunderbolt soon he finds himself convicted and on Death Row.

Bob and Ritzie get almost no time to enjoy her ex being out of the picture, because almost immediately Bob joins Thunderbolt on Death Row – in the opposite cell. Bob had been tricked into returning to the bank to see his old boss, just as a Thunderbolt-arranged heist was taking place; a man was shot and Bob was the poor patsy left holding the gun when the music stopped. The jury didn’t see it that way and found him guilty of the murder.

It’s an uneven contest between the two main protagonists. Thunderbolt is a larger-than-life thug, an imposing man with a tough-guy drawl and when he hits people, which is often, they stay hit. He desperately wants to kill Bob for taking his girl, and has successfully contrived from his Death Row cell to get his rival to the only place where he can get to him. And, remarkably, he has managed all this before he himself has been executed. Bob, on the other hand, is a quiet, unassuming ex-bank teller who loves his mom.

It has to be said that it’s not the most conventional Death Row that we have seen. One of the condemned men sings hymns and gospel tunes while accompanying himself on a piano. Another somehow manages to smuggle in a gun, at which the Warden (Tully Marshall), a unique character (a nervous old man whose main function appears to be to provide comic relief), lets Thunderbolt out of his cell to disarm the gunman through the bars: job done. In gratitude, the Warden agrees to Thunderbolt having the dog permanently in his cell for company. Messy, one would imagine. Then, four hours before Bob is due to be executed, Bob and Ritzie are married in a quaint ceremony with Bob on one side of the bars (in his cell) and Ritzie and Bob’s mother on the other.

At the last moment Thunderbolt, who had coldly rejected earlier entreaties from Bob’s distraught mother and Ritzie to confess that Bob had been framed, suddenly (and uncharacteristically) spews out a confession: Bob was framed! Bob’s execution is duly stayed, but Thunderbolt’s own appointment with the chair proceeds. Despite his recent outward display of redemption (he even inexplicably invites the prison chaplain to have a last-minute chat en route to the chair) – we fully expect it to be a scam and that Thunderbolt will find a way to kill Bob while shaking his hand goodbye. Sadly, he disappoints yet again, and heads off to his execution in peals of laughter on learning the unguessable name of one of the guards.

One should perhaps be more forgiving of film from 1929, but the combination of an incorrigible tough guy turning irritatingly corrigible, and a comedic, most unwardenlike Warden, were too much for me… and the story’s credibility.