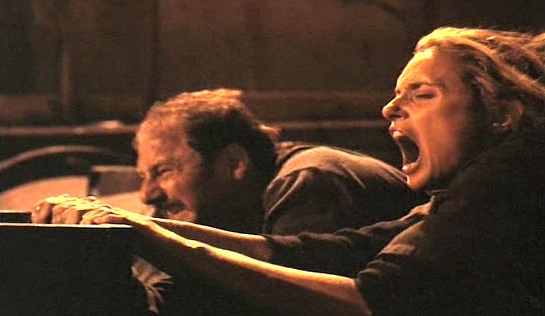 Surely the chief joy in watching futuristic movies of any sort is examining the bits of contemporary culture that have survived in the filmmaker’s vision of what the future might look like. “Besides, the ship won’t fly without this,” says the spaceship pilot, Wilson, smugly holding aloft a 3½” floppy disk. It is supposed to be the year 2251. Wonderful.

The spaceship has just delivered more Earth ‘cargo’ to the Alpha Four Maximum Security Penal Colony, which is dug into a giant asteroid. The cargo includes a campy villain named Villum (Jeffrey Meek), who for some reason kept reminding me of Adam Ant, and an annoying, talkative whiner, Jack Riley (Arye Gross), an embezzler who moved millions of ‘neo-dollars’ into his account on-line and insists (in vain) that he is supposed to be on board the ship to the lower security Alpha One.

If you are a fan of the prisoners’ exploding collars in Wedlock (1991) or the splendid intestinators in Fortress (1992), you might be a little less excited by the neck implant devices (NIDs) inserted into prisoners in Alpha Four via a large needle. The NIDs can be activated to ‘biologically terminate’ prisoners if they breach the virtual perimeter or otherwise displease the Warden.

Alpha Four is one of those prisons from which no-one returns. The worst of the worst are cryogenically suspended – although, as with Lockout (2012), the economic and moral advantages of indefinitely freezing prisoners in space, rather than simply executing them on Earth, are a little difficult to fathom. It seems that the primary benefit in keeping the prisoners alive might be to assist ‘behaviour research’ which may or may not have received ethics approval.

Up close these cryogenized prisoners look like frost-bitten humans hanging by chains out in the open. As the camera pans back, they transform visually into indeterminite objects in little silky cocoons… and it’s from one of these that the chief villain, McMasters (Jeff Speakman) is released after Villum introduces a virus into the prison security system, scrambling all code (except that relating to the NIDs) and allowing the prisoners overpower the guards and let him loose. McMasters emerges defrosted, clean-shaven and buff, but with an alarming mullet. He shows neither any ill-effects from his refrigeration nor gratitude to his liberators.

The guards are systematically shot (with pretty traditional 20th Century weapons) and many of the prisoners are zapped with a 23rd Century device, possibly linked to the NID and designed to limit the number of extras required for the remaining riot scenes. Villum also has a penchant for using a delightfully retro 14th Century samurai sword to assail his opponents. As most of the cast is eliminated, the main players left are McMasters, Villum, and the corrupt pilot Wilson (J Lamont Pope) on one hand, and Wilson’s beautiful co-pilot, Jessie Teegs (Maryam d’Abo), and the anti-heroic Riley on the other. Teegs and Riley are spared certain death when Wilson is killed by a random prisoner and Teegs is needed by McMasters to fly the ship. And Riley would seem to be needed by the plot to disable explosives set in the asteroid’s nuclear reactor and to create some vague and unlikely sexual tension.

Were it not for the action movie screenwriters’ guild cast-iron commitment to fair play, the film would thereafter end disappointingly. Luckily, when Villum is sent out to dispose of the unarmed Riley for no good reason, (a) he doesn’t shoot him because it is too near the nuclear reactor to use guns… and although it’s 2251 no safer alternative to guns have yet been invented; and (b) he not only takes his samurai sword, as would anyone, but gives Riley one as well to ensure a fair fight. Later, when Riley sneaks up on McMasters with a gun, he chooses to hit him with it, rather than shoot him, in order to give him a fair and reasonable chance to retaliate. Ah, the action genre!

Timelock is a quaint mixture of papier-mâché landscapes, a collection of callous and menacing prisoners, the most shabbily-dressed Warden on film, a bit of romance, 3rd rate special effects, and both intentional and unintentional humour… some of which is endearing. It’s silly and camp and bad enough to attract something of a cult following. 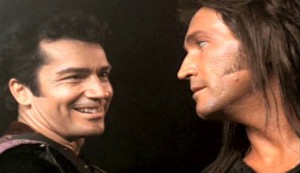 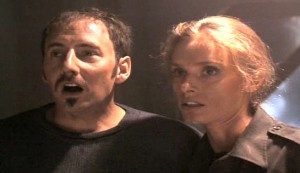