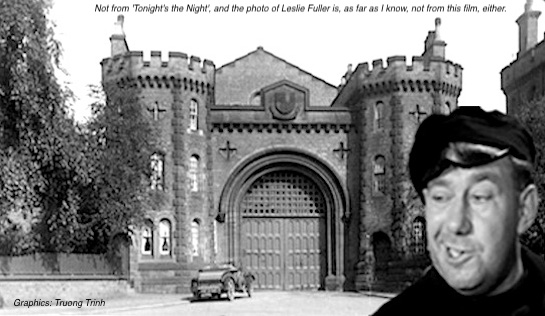 Also known as ‘Tonight’s the Night: Pass It On’ and ‘Bill Takes a Holiday’, it seems unlikely that this British comedy will surface in the near future. A 35mm copy is part of the British Film Institute archive collection, but as yet there are no plans to digitise it and viewing access is not made available to film buffs, researchers, stickybeaks or fans of Rod Stewart who think they have chanced upon an early bootleg video of his 1970s hit.

The BFI also has some stills from the film, but it seems that these are not readily accessible either. What we do have is a review of the film from the Dunedin newspaper, The Evening Star, of 25 July 1932, which said:

‘The new Leslie Fuller comedy, ‘To-night’s the Night,’ which comes to the Strand Theatre next Friday, is claimed to be a hilarious and hectic burlesque, which goes with a bang from start to finish.

Fuller, as Bill [Smithers], a slate club treasurer, is robbed of the funds on Christmas Eve. The theft is witnessed by Bill’s pal, but he suffers from a loss of memory following a blow from the real thief, and is unable to testify. His misfortune results in Bill being sentenced to imprisonment for three years. What with a hard-hearted governor, scowling warders, and the “toughest” lot of fellow-convicts ever gathered together in one prison, Bill has a lively time, only to be compared with that of the film-going public who share his adventures.

During a prison concert, in which, disguised as a lady cellist, he gives several boisterous renderings, he is escorted out of the prison by the governor who mistakes him for a guest. There is a final whirlwind chase between a Mercedes sports car and a baby Austin in which the real culprit is brought to justice and our hero exonerated.’

It’s a shame we will probably never get to see it; lady cellist escapees are few and far between.

It’s also hard to rate a movie that you haven’t seen, but on the basis of it not being seen to be worthy of preservation on VHS or DVD, I’ve decided to go with just 1 star. I’m happy, however, to adjust the rating on the considered, critical advice of anyone who has seen it.