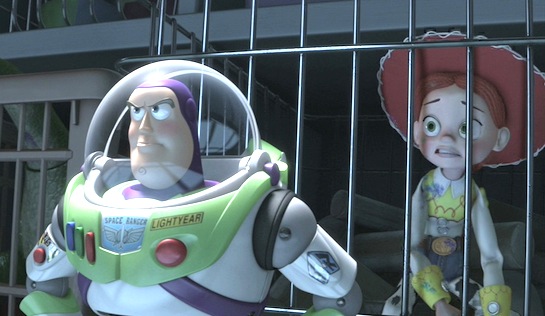 I’d seen several ‘top prison movie’ lists that include Toy Story 3, but was a little dubious. I’d imagined toys escaping from a toy box and had guessed it was a very long bow to liken it to a prison breakout… a bit like trying to draw an analogy between the whale in Free Willy and a prisoner’s quest for freedom. But I was wrong; a prison escape (of sorts) it is.

With their owner Andy about to head off to college, all his now-neglected toys are consigned to the attic – except for Woody (voiced by Tom Hanks), who is slipped into the box to go with him to college. But by mistake they finish up at a children’s daycare centre, where they are treated very roughly by the toddlers in the Caterpillar Room… and then just as harshly by the toys’ top dog – the deceivingly genial Lots-o’-Huggin’ bear (or Lotso, voiced by Ned Beatty). The toys fear that they won’t survive the battering in the Caterpillar Room, and ask to transfer to the gentler older kids.

But Lotso is having none of it; he needs toddler fodder. To keep them in line he has all of Andy’s toys imprisoned – locked up at night – and enlists the support of Buzz Lightyear (voiced by Tim Allen) to maintain order after forcibly restoring Buzz’s factory settings. Woody devises an elaborate escape plan where the toys break out of their secure baskets and avoid all sorts of traps on their way to freedom – including Buzz (who becomes an amorous Spanish-speaking astronaut upon his switch being reset), an all-seeing CCTV-monitoring monkey and the feared Big Baby (Lotso’s chief henchman).

There’s plenty to like about the film – both as a highly entertaining animation and as a take on prison escape movies. Lotso is a wonderfully monstrous warden character – smelling of strawberries and with a warm cuddliness that masks an underlying ruthlessness and bitterness; a true psychopath. He presides over a typical high-security environment with guards, patrols, and a team of enforcers (which include Barbie’s vain clotheshorse Ken). Hamm plays a lonesome harmonica in his cell and Woody gets some advice from a wise old-timer. There is even a nod to Cool Hand Luke where the rules are spelt out with every infraction punishable by “a night in the box.”

I’m not sure that it ranks as one of the better prison escape movies (and indeed is as much about loyalty and change and things other than prison), but it is witty and clever – rare features of comedies about prison. A delight. 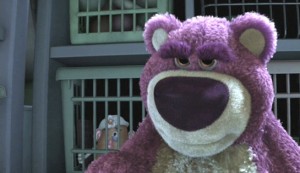 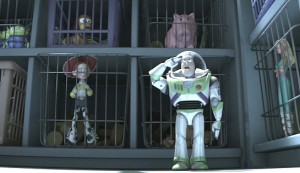 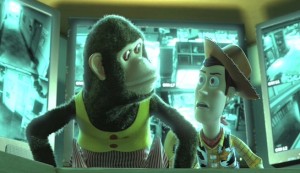 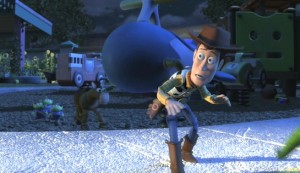