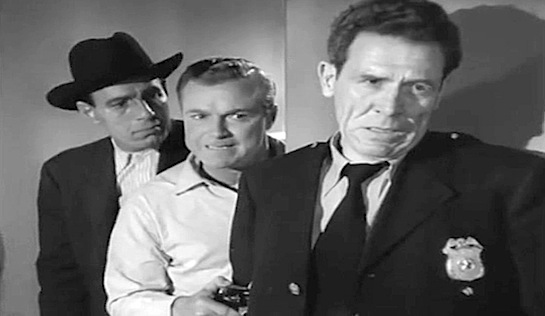 Thirteen shackled, desperate prisoners in a special compartment in train #307, headed for Alcatraz and under the control of Marshal Mark Stevens (Ralph Dunn) and just three armed prison guards. The next carriage along contains some anxious passengers, two sporting shooters, a gangster’s moll and a girl who saw one of the prisoners under escort on a platform before he joined the rest (and was immediately convinced of his innocence). What could possibly go wrong?

It’s always a tricky decision as to how you introduce such a large number of prisoners to the viewer. Do you have someone ponder over their files, or go into freeze-frame and stamp ‘Drugs, racketeering, prostitution and failing to wear a seat belt: 25 years’ over the top? Here, veteran Guard Grady (Roy Barcroft) walks down the carriage, giving newcomer Tommy Calligan (William Phipps) a bit of a rundown on those with whom he will be sharing the rest of the journey (and Alcatraz): “Got a nice sociable bunch in here… (Pointing) One of the Daniels gang. You’d never guess to look at him; he knocked over three or four banks. Fellow next to me over here is Peter Ader – Apache Indian. We’ve been calling him Geronimo. The old chief was a shrinking violet compared to him. Killed an Indian agent and his whole family in their sleep..”. And so on. It is a testament to the good manners of these dangerous criminals that none of them bop Grady on the nose or even voice their objections.

Not only are they well-mannered – they are all dressed in suits and ties and really do look like a relatively sociable bunch. But most are keen on escape, knowing that they might never get off Alcatraz; in particular Nick (who hears the train wheels whispering ‘Last chance… escape’ to him), Bart Kanin (Milburn Stone), the gangster whose girl is the the next carriage, and four-time escapee Doug Forbes (Don ‘Red’ Barry).

When Tommy is introduced to Kanin (“…used to be a big executive in their own business”) he gets a little excited. A small-time crook who had been working as a mechanic and going straight, Tommy had been enticed back into some dodgy work by Kanin’s girl, Virginia, whom he knew at school. Caught red-handed collecting money for Kanin, he ran – only for the pursuing cop to be shot by another of Kanin’s men, Marty Mason. Tommy had ditched his own gun but was caught after scaling a fence, and was later convicted of the cop’s murder… after which he escaped and earned himself a berth at Alcatraz.

The train trip, inevitably, is not uneventful. Nick sees an opportunity to escape and gets shot. Virginia slips a key into Guard Grady’s pocket, from which it is picked by a safecracker in a faux fight in which Grady sees it as his duty to intervene. The prisoners free themselves from their shackles and, led by Forbes, get access to the guards’ guns, and two of the guards are killed – the second, Grady, executed when Marshal Stevens refuses to stop the train to secure his release.

When the train is stopped Forbes knocks out young Tommy and re-secures him in his shackles, having heard his story about his wrongful conviction and hoping that he might yet get the chance prove his innocence – and knowing that all those out of their shackles will get the chair for the guards’ murders, if caught. As most of the escaping prisoners are shot, Beatrice (Janet Martin), whose sympathy and affection for Tommy took hold after one gesture on the railway platform, offers to tend to his injuries, just as a telegram comes through advising that Marty Mason had confessed to the cop’s murder. Romance beckons… and a taut drama becomes slightly less taut.

Train to Alcatraz is short (just 60 minutes long) and necessarily punchy. The build-up in tension ahead of the escape bid is heightened by the Marshal’s dilemma – do you save your guards’ lives but allow dangerous criminals to be on the loose, or sacrifice good men? It’s a time-honoured warden’s dilemma, every time a guard is taken hostage. But it just seems to me that if you’re transporting thirteen of America’s most dangerous men, you might have them more securely bound up than in train compartment with a single locked and barred door, and wouldn’t rely on a railway official to keep inquisitive fellow travellers away from the door.