The Bowery Boys made 48 movies, apparently, at a rate of 4 or 5 offerings a year in their heyday. This was their 19th. Maybe the formula was getting a bit tired, or maybe this was a mere blip and the other 47 are full of noirish, humour-tinged drama or straight-out effervescent wit. Whatever the problem, the word ‘lame’ was invented just for films such as this.

‘Slip’ Mahoney (Leo Gorcey) and four other face-masked Boys are walking past the Bowling Green Van and Storage Company. They walk through a door that just happens to be open, as you do when you’re incognito and not wishing to cause anyone alarm… and stumble upon a robbery. They grapple with the robbers – including a stick-wielding old lady – all of whom manage to get away when the Police arrive, leaving a bound victim and five blokes wearing disguises. The Boys all claim to have been headed for an out-of-season Halloween party (in April). Sure. The Police arrest them.

While out on bail, Whitey overhears some traffic on the short-wave radio. The Boys recognise the gravelly voice of prisoner Bat Armstrong (Pat Collins), who had featured on a radio program from inside, plotting his next heist with his gang on the outside. So, of course, when Slip is rather generously offered probation by the judge on the robbery charge, he insists on being put in prison so he can locate Bat and exonerate his crew.

Slip takes one of his Boys, ‘Sach’ Jones (Huntz Hall), along for the ride. Slip is all front, a big noter, smooth… and with a talent for malapropisms. When he’s thrown into solitary, for example, he complains bitterly about being placed in “sanitary confinement”. Ho, ho, ho. It doesn’t get any more sophisticated than that, I’m afraid. The dim-witted Sach, on the other hand, presents lots more uninspired comedic opportunities by being ingenuous and dim-witted.

Slip and Sach get mistaken for two celebrated Chicago gangsters, Pretty Boy Gleason and Benny the Blood, as their reception into prison neatly coincides with the Chicago hoods’ anticipated arrival. They are feted, and even Bat Armstrong is keen to make their acquaintance.

Sach tips Bat off about the cool 75 in a safe in the Sweet Shop where the Boys hang out – owned by little ol’ Louie Dumbrowsky (Leo Gorcey’s father, Bernard). Bat (from the short-wave set in his cell) promptly arranges for his gang, led by his stick-wielding Ma, to do over the Sweet Shop. Naturally, when the loot totals $75, not $75,000, they are not pleased… and are even less pleased when the real Pretty Boy and Benny the Blood turn up.

Whitey hears Bat planning an escape over the short-wave, but can’t get the Police to take him seriously and investigate. Bat is undeterred by the prospect of The Bowery Boys ratting on him; he and his crew take Slip and Sach hostage, and use them as human shields in their escape… but just as they think they’ve made good their getaway they fall right into the hands of the Police. Their game is up and The Bowery Boys are cleared. It’s a relief.

And the real relief is that the film finishes after just 67 minutes. 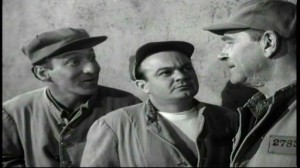 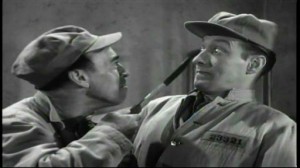