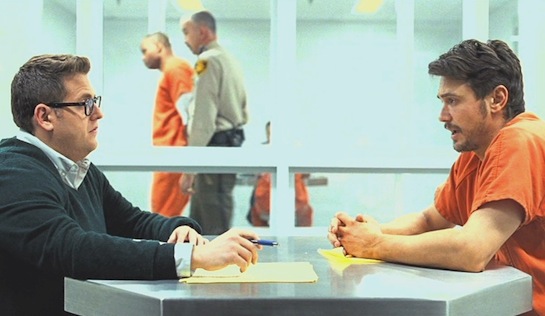 This is a long way from being a prison movie, even though many of its key moments occur in prison. Or more specifically, in two visit rooms in two prisons. And involving just one prisoner.

It’s based on the real life relationship between author Michael Finkel (Jonah Hill) and a man accused of murdering his wife and three young children, Christian Longo (James Franco). Finkel is a disgraced journalist, sacked by the New York Times for blending the narratives of five young African men’s lives, and – to make a bigger emotional impact – passing it off as it just one man’s tragic story. Longo is a charismatic psychopath who fled to Mexico after the annihilation of his family, passing himself off as Finkel, whose work he admired. The real Mike Finkel seeks him out in prison, and Longo promises him the ‘true story’ on two conditions – that he doesn’t divulge any details prior to the trial, and that he teaches him how to write. They develop a strange, slightly disturbing friendship.

Finkel becomes obsessed with the case, keen to explain Longo to potential readers and a little unsure as to whether the man is guilty as charged. But he is shrewd enough to realise that – with his credibility shot – an exclusive story about Longo is a way back into the public eye and a big paycheck. Longo hopes that Finkel’s involvement might help his chances of an acquittal. Who uses who more?

The film is an excellent psychological drama, with Longo seducing Finkel with his charm and his miserable backstory, while skirting around what happened with the death of his wife and children. They meet around ten times in prison pre-trial, and share letters and thoughts and fragments of their lives (both characterised by lies and shame – to different degrees). Longo manages to drag Finkel’s wife, Jill (Felicity Jones), into his world, using the personal glimpses that Finkel has let slip to let her think that her husband has disclosed the most intimate details of their lives. And perhaps he has. It would be fair to say that Jill is less generous to the accused man than her husband.

All of the prison scenes take place in visit rooms; almost all in the whitest, most pristine prison you will ever see. But the story is not about Longo in prison, but what Longo did outside of prison, the relationship he cultivates with Finkel, and Finkel’s own vulnerabilities.

It’s a fascinating story, more fascinating because (notwithstanding the largish dose of irony in the title) it is a true story. 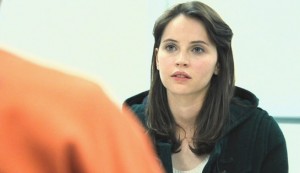 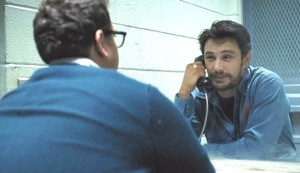