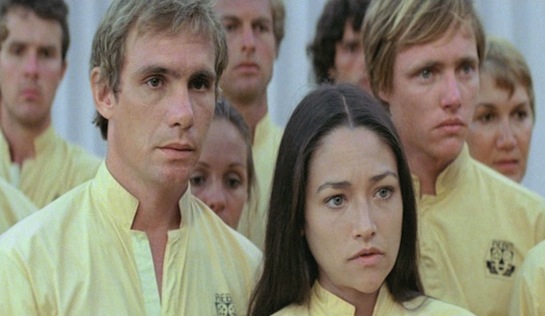 It’s a few years into the future. The Government is rounding up all its deviates in the community (people who don’t submit with abject obedience to its rules and standards), and putting them in prison camps for re-education and behaviour modification. A little reminiscent of the early 1940s, you’d think.

In the latest batch to be taken to Camp 47 are Chris Walters (Olivia Hussey), Rita Daniels (Lynda Stoner) and Paul Anders (Steve Railsback), of whom only Paul seems like a real threat to the Government. Chris was working in a shop in which a man being chased by security forces sought refuge; she is suspected of being a sympathiser. Rita is suspected of being a prostitute (a charge she denies). And Paul, an escapee from three similar camps in the past, was arrested in the midst of making a revolutionary radio broadcast.

The Camp Master, Charles Thatcher (Michael Craig), is a measured, benign-looking man from the conservative ruling classes with a surprising taste for brutality. His camp runs on fear. A young woman is slapped about and kicked by Thatcher’s chief tormentor, Ritter (Roger Ward), until she is near death, and none of the scores of watching inmates dares to intervene. Another shackled prisoner is challenged to carry two large spherical containers which leak fuel, and is pushed around and humiliated by the guards until they tire of the game and set fire to the fuel, incinerating him.

And then there’s the ‘turkey shoot’. Thatcher, his wife (or lover) Jennifer (Carmen Duncan), a senior Government official, Mallory (Noel Ferrier), and other ‘guests’ each select a prisoner whom they would like to hunt, for sport. The unarmed prisoners are given a head start of three hours, after which the Camp Master’s team pursue them in off-road vehicles and armed with weapons such as all sorts of firearms, a crossbow, and a large, hairy circus freak. The prisoners can refuse to take part, of course, but are assured that they will never be released if they do. And if they can survive until sundown, they win their freedom.

Paul, Chris and Rita are all selected for this entertainment, as are two others, Dodge and Griffin. Chris is shy and innocent and out of her depth in this combative environment; unlikely to be able to fend for herself. Paul is confident. And Rita is… blonde and buxom. They are sent out of the prison at 30 minute intervals, denying them the opportunity to plan and work together.

The pursuits are predictably silly. The quarry climb and run in their pastel yellow jumpsuits, out in the open. Griffin, on ambushing and overpowering a guard, declines to swap into his uniform but does spend lots of valuable time ensuring that he suffers a nasty death. Multitudes of shots are fired around the fleeing prisoners, to prolong the final kill. Jennifer has a range of novelty arrows, many of which explode just near her prey. Bullets decapitate saplings with extraordinary regularity. And Ritter says on cornering Paul, “I’m going to take my time with you, boy” – electing to fight with his fists rather than his machete or his firearm.

The climax is, well, climactic, but the highlight is a couple of severed hands still twitching, one still on a trigger, amongst several other gruesome touches.

Does it have anything to say about prisons or imprisonment? In short, no… other than that there are some novel ways of punishing and executing prisoners and abusing power.

It does have considerably more to say about politics. Made during Margaret Thatcher’s reign in the UK, the film has her namesake – the privileged, wealthy  Charles – asserting in the film, ‘Freedom is obedience. Obedience is work. Work is life’… more than a little arbeit macht frei-ish, no?  His pursuit of (political) opponents, callousness and absolute lack of regard for those in his care might make more of an impact if the action bits weren’t so silly. And the good guys so uniformly unlikeable. 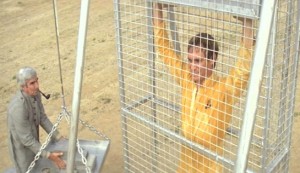 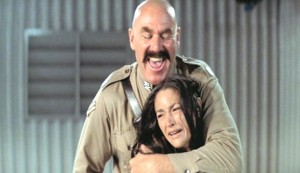 Also known as Escape 2000 and, in the UK, Blood Camp Thatcher.