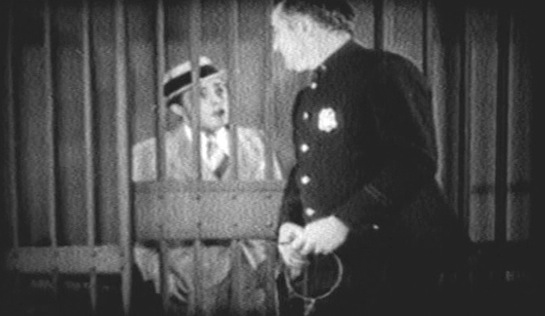 OK – I admit that this doesn’t really meet too many of my prison movie criteria. The thing is, I was looking for a prison comedy starring an Australian silent actor I’d never heard of – Snub Pollard – and hadn’t realised that the collection in which Turn Him Loose appeared starred Bobby Vernon, and not Snub. Or that the film was not quite 13 minutes long. Or that despite the promise that it shows Vernon “[finding] himself on the wrong side of prison bars while tracking a beautiful underworld gun-moll”, he is never locked up long enough to even lose his boater hat.

The film is a short (obviously) silent farce. An old friend asks a favour of the District Attorney (Tom Dempsey) – to give his failing college student son, Jerry (Vernon) a job. The DA does, asking the young man to follow a gangster’s moll who is in his office for some reason – hoping that she will lead him to the gangsters’ den. He invites Jerry to take a quick surreptitious look at her, through the keyhole. Jerry looks… and spies Pearl (Margaret Lee), the DA’s daughter – whom he immediately starts shadowing.

Pearl soon objects to being followed, and demands of a policeman, “Arrest him! He’s a flirt!”  The policeman obliges, and Jerry is put straight into the lock-up. Jerry protests and asks that the police check with the DA to exonerate him (“I’m his new star sleuth”). The DA confirms his story, tells the police to “turn him loose”, and Jerry is immediately released. But he then sees Pearl talking to a man and, assuming that he is a gangster, escorts the man back to the police – whom the police welcome as their Chief. Jerry is locked up again. Again his incarceration is brief.

Ultimately Jerry tracks Pearl back to her house. He calls for police backup to help him break into what he is certain is the gangsters’ den. Inside the house, the DA, who has also returned home, calls the police as he thinks that ruffians are trying to break in to attack him. More police arrive. Jerry breaks through the door and leads his police team to… the DA and his daughter. Everyone has a big chortle at the misunderstanding.

While it’s a disappointing prison movie (I put the four prison scenes at a combined total of 49 seconds: we see Jerry put into a cell, we see him shooting craps through the bars with the prisoner in the next cell, and we see him being released twice), it is a good example of a ’20s farce. And the intertitles are drollish: the DA is introduced with, “The District Attorney never lost a case – He kept his cellar locked” and Jerry’s appearance is announced with, “Jerry left college with two good marks – They were black and blue.” I did say drollish.

Sadly, 49 seconds do not a prison movie make.