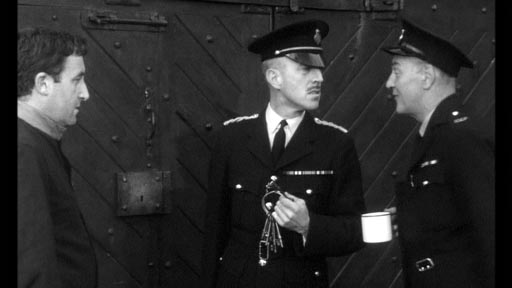 I’m not sure how ‘comedy capers’ are different from ordinary comedies, but this is definitely in the caper mould. Peter Sellers plays Dodger Lane in this black-and-white movie from the Carry On era of British cinema. His character is more a refined cockney crook, if there is such a thing, and the film is less of a vehicle to showcase Sellers’ talents than the Clouseau and Strangelove movies that were to follow soon after.

Lane and two mates, Lennie and Jelly share a three-outer in Huntleigh Prison. They live an extremely comfortable existence, with morning papers, milk, food and brandy delivered through their cell window each morning. Their trusting, liberal Governor is very proud of the prison’s rehabilitative pursuits (like basket weaving) and allows the prisoners considerable latitude; neither he nor his less-than-diligent staff are, for example, aware that the prisoners are holding safe-cracking lessons during woodwork classes. The Governor unwittingly welcomes into his prison the trio’s criminal associate, Soapy, posing as their vicar. Soapy has a proposition to put to the men. He has hatched a plan that involves the men escaping from the prison on the day before their release, stealing £2 million of a Sultan’s diamonds which are under Army escort, and then breaking back into the gaol with the perfect alibi. At first a breakout seems easily done as they count on being able to take advantage of the decent but bumbling Chief Prison Officer Jenkins – but the task becomes harder when Jenkins announces his retirement and is replaced by a new Chief, Sidney ‘Sour’ Crout, who brings with him a clipped no-nonsense style and a determination to restore some hard work and discipline to the prison. In many ways Jenkins and Clout anticipate the roles of Barrowclough and MacKay in the Porridge series, with Crout’s backfiring efforts to toughen the place up providing much of the film’s humour.

There are some genuinely funny moments, many of them related to Lennie’s mum’s disappointment in him for his failure to even try to escape, but it’s sadly dated. 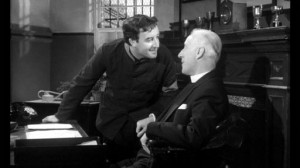