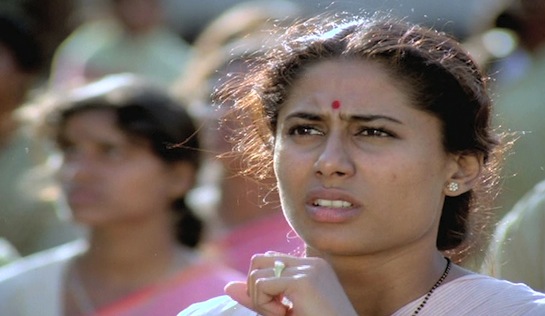 You’d think that after a long 2½ hours watching one woman’s painful journey towards self-realisation that I’d have some idea of what the facility was that she left her husband and child to run. But I didn’t.

Routinely described in film reviews as a ‘women’s reformatory home’, which suggested (to me, at least) a place where women are sent by a court to reform, it seems that it is more accurately a Mahila Ashram – a non-government, community-run facility “in rural India (which) houses women from a cross-section of society, comprising of ‘Destitutes, Desperates, Criminal, Lesbians and the other Cut Castes’ (untouchables).” *

So it’s a strange beast, this ashram, holding a lot of poverty-stricken women who have been evicted from their homes and women suffering the shame of intimacies and ‘illegal’ pregnancies out of wedlock. And there are some wrong-doers, too. The ashram has high walls, a gatekeeper to regulate traffic in and out, staff in uniforms, a board that considers women for release, forced labour… and when two young women run away, they get brought straight back by police and placed in the lock-up. It all sounds a bit prisonny, doesn’t it?

Now, it’s in order to be the Superintendent of this remote ashram that Sulabha (Smita Patil) leaves her comfortable, monied city life, her urbane lawyer husband Subhash (Girish Karnad), and her young daughter, Rani. Despite all that she has at home, she is miserable; she wants to see what she can do for and by herself, and not be a dependent wife. She has a degree in sociology and a heart for social work, but sensibly declines to work for her dynamic, domineering mother-in-law, who does social work like others do business – barking orders and taking no prisoners. The ashram is 200-300 miles from her home, and Subhash reluctantly gives her his blessing to go – observing that he’d rather be seen to be a fool than a tyrant.

The ashram is at times tough. There are lazy staff, a micro-managing chairwoman of the Board of Management, a sari-seller who offers kickbacks and expects not to be challenged about the prices he charges, and a local politician who expects young girls to be delivered to his home. And there are the tragic women’s stories; a young woman who kills her child (opting for jail) rather than be sent back to live with an abusive husband, another who dies in childbirth (made more poignant when one learns of the similar death, from childbirth complications, of Smita Patil some four years later, at just 31), and a lesbian couple who are effectively driven out of the ashram by the disapproval of the other women, and who then self-immolate upon their recapture and return.

After the grim deaths of those two women an investigation into Sulabha’s management is initiated by her Board’s chairwoman. She is accused, inter alia, of damaging local business, being rude to the local politician, and allowing one of the women to remarry. She is exonerated, but resigns, weary of the oppositional forces… and returns home.

It’s not a happy homecoming. She is pretty much ignored by her entire family; her daughter has not forgiven her for deserting her, and her husband admits to taking another lover in her absence. “I compromised with your need,” he tells her. “I’m sure that you will understand mine.”  Yet she is no longer miserable; at least not in the same way as she was before, and ventures forth again.

It is, as I said, a long film, but a worthy one. It raises all sorts of questions about double standards and immorality; the women in the ashram are often women who have offended against the community’s mores, and yet they stand in similarly harsh judgment of the lesbian couple. Sulabha herself challenges the established morality, abandoning her husband and daughter to pursue her own professional interests, and is judged harshly by others, including the Board of Management (whose members, in a wonderful scene, distractedly apply makeup, knit, listen to the cricket, and are too feeble to follow proceedings while determining cases for release, and who later try to have Sulabha disciplined for not falling in with the local corrupt practices).

So, is it OK for a husband to pursue a career at the expense of his family, but not his wife? Is it better to be a faithful woman who spends time apart from her family, or an adulterous man who sticks by his mother and child? Is it reasonable for one immoral person to cast judgment on another’s immorality?  And so on.

It’s an engrossing story of a professional woman who dares to seek a life for herself, and at the same time fulfil a passion for helping other women. And in reforming others, she reforms herself. 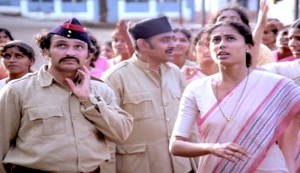 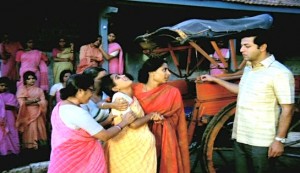 * the very authoritative blurb on my DVD.  ‘Umbartha’ by the way, means ‘threshold’.