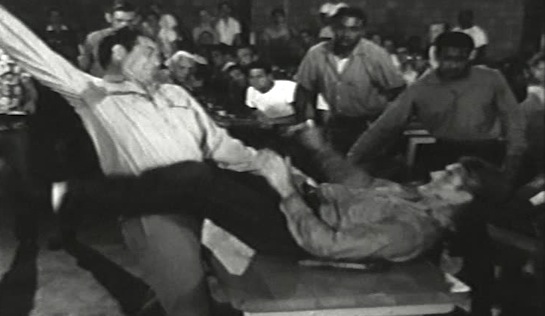 Unchained is the story of one man’s struggle – with the unerringness of his belief that he’s always in the right, and against the temptation to escape. But it is (or was) also an opportunity for America’s first major minimum-security prison at Chino (the California Institute for Men) to showcase itself – and its first warden, Kenyon J Scudder, on whose book Prisoners are People the film is partly based.

Steve Davitt (former running back Elroy ‘Crazylegs’ Hirsch) is a hot-headed, self-righteous man, in jail for the first time.  I know that physiognomy may no longer be in vogue, but (without meaning to be unkind) there’s something about Hirsch that makes one believe that he could easily share some of the less-attractive traits displayed by his character. Which simply means, I suppose, that he may be well cast. He also looks better with his shirt off, a fact that does not go at all unnoticed by the filmmakers.

Davitt is serving 1 to 3 for what he considered to be a justified assault, and extraordinarily finds himself at Chino despite an unprovoked attack on guards at the County Jail and then, within minutes of his arrival at Chino, him chinning a guard who tells him to keep up with the other inmates. But we’re promptly reminded that this is Chino, a prison modelled on its warden’s credo of ‘prisoners are people’, and instead of loading Davitt straight back on the bus or throwing him into solitary, the injured guard runs after him and asks, “What do you think I was going to do back there?” and not a word more is said about the assault.

Davitt is clearly uncomfortable with the openness of his new environment. He’s not helped by Warden Scudder who not only greets the new prisoners by laying out the prison’s philosophy in the time-honoured way, but also shows them how to get over the barbed wire fence without hurting themselves if they want to escape. Davitt wrestles constantly with the urge to escape and return to his wife, Mary, and son, Win, and appears incapable of working through the consequences of an escape; in short, he doesn’t seem to allow the possibility that he might run to Win and lose.

Fortunately, the prisoner in the next bunk, Bill Howard (Todd Duncan), epitomises all that Chino wants its men to become – accepting of responsibility, slow to act in anger, and capable of dealing maturely with setbacks – and is a steadying influence on Davitt. Gradually, we hope, he helps turn Davitt around.

Scudder (Chester Morris), meanwhile, keeps popping up to dispense some wisdom, or demonstrate his sense of justice and fairness, or quell a riot with a few well-chosen words, or have an egalitarian lunch in the midst of his many charges. He is a bit of a marvel, in the tradition of Duffy and other super-wardens.  Not only that, but it would seem that in real life he was the unwitting instigator of the yellow ribbon being seen as a symbol of forgiveness of prisoners, after recounting a story told to him of a newly-released man being welcomed back home by an apple tree full of (white) ribbons.

Hooray for shirtless prisoners who turn their lives around! Hooray for Chino! And hooray for Kenyon J Scudder!

Thanks to Melian for ensuring that I wasn’t short-chained.