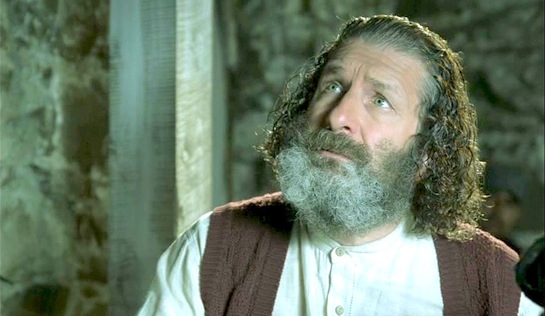 It’s 1938 in Stalinist Russia and Jakob Seel (Jeff Stewart), a Christian chess-loving community leader known to everyone in his small village as ‘Teacher’, is asked by a neighbour to say a few words at her brother’s funeral. Jakob, who has been steadily relieved of all his authority by the Communist regime, agrees – knowing that if the authorities find out, those prayers will land him in jail. The authorities do find out, of course, and he is bundled off to a rustic dormitory-style prison inhabited by lots of others who, in the words of the prison’s resident bully, Bruno (Sal Rendino), are collectively “holding back the Utopian paradise”.

Now, 20 years earlier Jakob had defeated a Ukrainian chess master and had presented the vanquished man’s son with the king. The son, Nikolai, who misunderstood the gesture and was bitterly insulted by it, has grown up to be the commandant of the prison in which Jakob now finds himself. Oh dear.

There are a number of signs, certainly, that this is a brutal, terrifying prison. One prisoner, David, is summarily executed in front of the others for writing and retaining bits of scripture. A number of prisoners are mysteriously removed during the night, undetected by the others (goodness knows how), never to return. And another prisoner, Karl (Matthew R Staley) reports having things inserted under his fingernails in order to extract a confession from him.

It might sound a bit silly, but otherwise the prison seems humdrum, much like many others. The bully bullies. A simpleton, Yasha (Quentin McCuiston), is made fun of. An escape is attempted by digging through the dirt floor. Suspicion abounds, as does the myth that if you can beat Nikolai at chess, you can go free. A number approach Jakob for lessons.

To overcome the oppressiveness, the men determine to start a choir – knowing that it’s a risky venture as the hymns that they sing are likely to invoke the commandant’s wrath. Oddly, he allows it – but insists (for good reason) that Yasha, tone-deaf and very enthusiastic, not sing. In leading the choir Jakob rediscovers some lost purpose and even the Communist atheist, Bruno, is moved by the hymns and the believers’ courage… and starts to wonder whether there is a mercy-extending God, after all.

The biggest test of Jakob’s faith-in-practice is when (and I have no hesitation in disclosing this plot twist, because I expect no-one to seek this film out), Yasha’s drunken father Oigen is himself put in the prison… and it becomes evident that it is he who has been responsible for giving information to the authorities that has led to Karl, Jakob, his own son Yasha and a number of the others being put in prison. It also emerges that Jakob was set up by Nikolai – who encouraged Yasha’s mother to fabricate her brother’s death and invite Jakob to preach at his funeral unlawfully – just so that he could get him into his jail. Jakob nonetheless doesn’t seek to avenge Oigen’s treachery, and forgives him. It’s a short-lived forgiveness, for Oigen is shot and killed in the camp… but all the wronged God-fearing men magnanimously throw a handful of dirt on his grave; Christ’s mercy being lived out.

The film is said to be based on a true story. But it is a little too smooth-edged and has a made-for-Christian-TV feel about it; one senses that it is preaching to the converted… which means that it doesn’t work hard enough to get the sceptics and agnostics to buy into the story. I can’t recommend it.