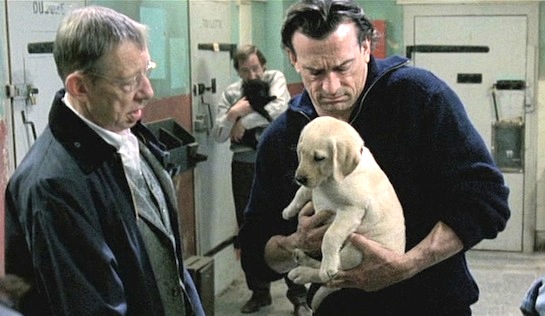 Six cute Labrador puppies. Six tough prisoners. And one particularly closed off, violent prisoner who has absolutely no interest in resocialisation, but whose outlook is changed by the meeting of the two.

In the film the prison’s new Director, Gloria Cornelius (Clelia Sarto), is aware of programs to resocialise inmates using animals in the United States, with successes already demonstrated from the positive interaction between humans and animals, and wants to introduce a similar program in Germany. A program involving the training of guide dogs for the blind, overseen by an experienced dog trainer (Hark Bohm), is duly announced; the candidates are examined closely and the six most suitable inmates are selected. For those selected the first advantage is that they can move to a separate prison camp. And each one receives a Labrador Retriever puppy for which he becomes personally responsible.

One of the prisoners, Moskowitch or ‘Mosk’ (Thomas Sarbacher), is a surly loner with a history of violence, whose sole goal is to win the prison’s in-house weightlifting championships. He participates reluctantly – and only at the special request of the Justice Minister – and finds himself unable to bond with his puppy. He carries a dismissive, ‘don’t care’ attitude and makes little progress in training. For the other participants in the project there is much at stake; if one fails the entire program is considered to have failed.

Accordingly, Mosk has a lousy rapport with the others. Even after several weeks he still has not managed to trust his dog (named, unimaginatively, ‘Dog’), but his negative attitude to the animal suddenly changes when she is at risk of dying from poisoning; only then does he notice how attached he has become to her. When he gets his pup back from the veterinary clinic after a few days, she is allowed to sleep on his bed for the first time… and from then on he is much more involved in the training, which pays off for everyone else as well. They pass their first exam.

The prisoners soon realise that they cannot keep the dogs forever. The dogs complete the last part of their training with their new owners and then have to leave the prison. It is extremely difficult for Mosk to part with his animal. The other inmates also suffer, and it comes to a brawl involving all of them. Consequently Mosk ends up in the infirmary… from where he escapes and immediately sets out to find ‘his’ dog, and he kidnaps her. However, when he realises that her new owner is waiting every day where she ‘ran away’, he gives her back and voluntarily returns to prison. The next training program is already waiting there and Mosk starts over with a new dog. Awwww.

In 2001 director Jan Hinrik Drevs made a documentary, ‘Dogsworld – Smart Dogs’, about a real life dogs-in-prison project in a New York prison, and then followed it up with this feature film. And a very entertaining feature it is, accurately depicting prison life in the context of a good rehabilitation program. Well, perhaps, the escape is not entirely reflective of security reality, but it facilitates in an entertaining way the changes a seemingly ‘hardened’ prisoner can make in his life, initiated through contact with the dog but ultimately relating to his dealings with people. 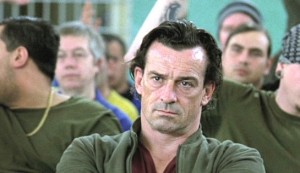 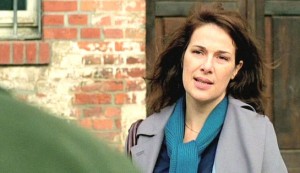