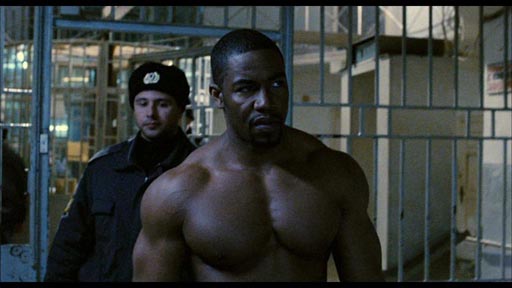 Now, I don’t play computer games but I imagine that this is pretty much what they are like: two cartoonishly muscled protagonists in 3D-animation-enhanced combat, with a rather flimsy plot to justify the fighting. But probably without the mushy ending.

Mind you, there are a couple of things that set this prison fight film apart from others in the genre [from Penitentiary (1979) to Broken Bars (1995) to In Hell (2003), each of which is separated by degrees of awfulness]. The first is its setting; much of it was filmed at the magnificently wintry Vratsa Prison in Bulgaria, which provides a terrific backdrop to the action. The second is its stout refusal – in a film about a US citizen wrongly imprisoned in Russia – to be drawn into demonising the entire Russian population.

The film is a semi-sequel to Undisputed (2002) in which Ving Rhames played the swaggering ex-heavyweight champion George ‘Iceman’ Chambers. In this update, Chambers is fully reconstructed; he is no longer the bad guy, and is played by someone else – Michael Jai White. He is also in Russia, for some odd reason, broke and reduced to flogging vodka on TV.

Not far away, crime boss Gaga (Mark Ivanir) is not making enough money. The star fighter at the local Chornya Cholmi Prison, Yuri Boyka (Scott Adkins), is so good he starts as odds-on favourite each bout, and there is no money to be made in the betting ring. So what else would any self-respecting mobster do but plant drugs on the visiting Iceman, have him sent to prison, and set him up to be a challenger to Boyka?

Chambers uncharitably doesn’t enjoy being framed, and is at first a little… stubborn and irritable. He is forced to shovel raw sewage, eat muck, be provoked and taunted by Boyka’s goons and is generally not made to feel welcome.

The drugs which were planted in his hotel room were secreted in a hollow which Gaga’s men cut out of the Iceman’s Bible. But it turns out that Chambers is not particularly good at turning the other cheek. ‘Meek’ does not appear to be in his vocabulary.

Gradually he accepts that Gaga runs everything and the only way that he will be released is to fight the champion. He does. His trusted cellmate, Stevie, a junkie, swaps his water bottle for a spiked one on the instructions of Gaga’s men. Boyka belts the living daylights out of his challenger.

As a result, Chambers’ odds lengthen for the inevitable rematch. He continues to fight the authorities. At one stage he is strung up in an exercise yard, in the snow and in light clothes, and left there overnight; how he doesn’t die of exposure is a mystery. The entire prisoner population takes pity on him next morning and drape warm clothes over him. They give him food and drink, and then to a man stand with him. He doesn’t even catch a cold. He’s one tough mother.

Into his corner comes another sympathetically-drawn Russian, Crot – a long-haired, wheelchair bound lifer. Crot (or Nikolai, once he becomes humanised) teaches Chambers some mixed martial arts techniques he learned in the military. A bond develops. It’s a beautiful thing.

Will Chambers triumph once it’s a level playing field? Will Gaga clean up? Will Chambers secure his release? Oh, the drama! It makes one awfully impatient for Undisputed III. 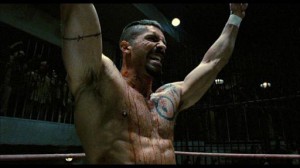 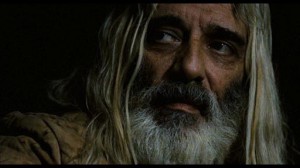