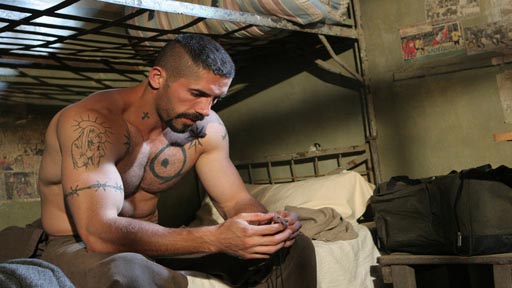 I am seriously naive at times. I’d never appreciated the reach of these international crime bosses, who are so powerful that they can draft in eight murderers from prisons all around the world, have them fight against each other, award the winner his freedom and shoot all the losers, just so they can make large sums of money by gambling on the result, which they have pretty much fixed.  Does the UN know about this?

All of the above is pretty straightforward, yet we still have two filmic dilemmas. Our hero here is Yuri Boyka (Scott Adkins), the bad guy from Undisputed II: Last Man Standing (2005), who has to be reconstructed here as the good guy, the guy we want to win. We want him to win because he has never quite recovered from getting his knee smashed in the last movie, he has been reduced to cleaning the prison toilets, and he has just been rejected for parole and told that his crimes were so serious that they won’t even consider him for release for another 15 years. We are a forgiving audience, and prepared to forget all the horrible things he represented in the last one.

But the second problem is that he is Russian, and there is an American fighter in the same contest – the brash, trash-talkin’ Turbo (Mykel Shannon Jenkins). How on earth can we have a Russian as our hero when DVD sales depend on the US market? Answer: Have two heroes.

Now, I may have been a bit hasty in commending Undisputed II for avoiding the trap of demonising the entire Russian population. The action in this sequel takes place next door in Tbilisi, Georgia, and the producers apparently see nothing wrong in painting all Georgians as nasty, corrupt and inept. For a start, it probably has a much smaller DVD market.

In III Georgian mobster Rezo (Vernon Dobtcheff) calls the shots; it’s his patch, and he controls all the prison officials, whose main job is to improve the chances of the locally-imprisoned Colombian fighter, Dolor (Marko Zaror), on whom Rezo has outlaid large sums of money. All of the prisoner fighters have the good fortune to be supported in Tbilisi by their local crime bosses (which says something nasty about the fight scene, or prison administration, or both), all of whom seem to readily abandon loyalty to their own fighters when Rezo convinces them that they, too, can clean up by backing the big Colombian.

The prison officials make it hard for all the fighters, other than Dolor, by feeding them slop, making them work on a chain gang, and giving performance-enhancing drugs only to Dolor. Or drugs with other qualities, perhaps. Boyka and Turbo of course hate each other, initially. After a non-sanctioned fight they are put into punishment cells so small they can only stand… but gradually they come to realise that they are both pawns in Rezo’s game, and a friendship develops.

In a move designed to take off his competitive edge, Turbo is accused of an intimate relationship with his Russian mate just ahead of his scheduled semi-final bout with Dolor, and is badly beaten up by the guards. Later, at work in the quarry, Boyka convinces Turbo that he must escape if he wishes to avoid being disposed of after he loses the Dolor fight. (I’m still not sure why the authorities found it helpful to shoot the losers, rather than simply put them back on a plane home; it would unnecessarily add risk to the cost of earning a corrupt income, I would have thought). Anyway, between them, Turbo and Boyka overpower all those feeble Georgian guards, and Turbo flees.

Boyka, of course, is spared because they need him as the patsy in the title fight. That final contest becomes a bout between the prancing, drug-using, preferential-treatment-receiving Dolor and the injured, abused, toilet-scrubbing Boyka who has battled overwhelming odds even to get to this point. I could not possibly disclose the winner.

These really are the most inane of movies. It reminded me of The Condemned (2007), another piece of nonsense where they drafted in bad guys to fight each other, with a prize of unconditional release at the end. And I still have a small problem with letting a prisoner out of prison 15 years early, just because he is a good fighter. But my biggest problem is that I can never, ever watch Undisputed II again, so firmly have my allegiances switched around. What a terrible shame. 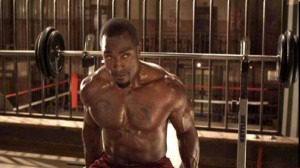 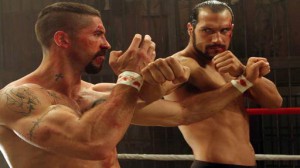