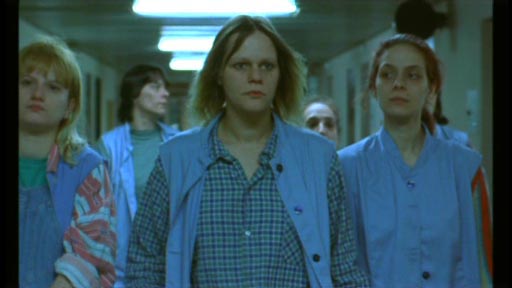 Bénédicte Liénard has strong views about prisons. “Prison… is the absence of desire, of life, of what makes life.” They’re places where nothing happens, she says, and she made a documentary about it, Heads Against the Walls. Rather than just make the doco and walk away, she took her cameras back into Lantin Prison near Liège in Belgium to run classes for prisoners, as “the system has no answers for people with lives adrift.” And then she wrote and directed this film (in which some of those prisoners play themselves) – a slow-moving but powerful examination of life being sucked out of oppressed women… and not just in prison.

Joanna (Séverine Caneele) is in prison for an undisclosed violent offence after she ‘lost control’ while a union leader on a production-line at a food processing factory. Her best friend, Claudine (Sofia Leboutte), who also works at the factory, tries to maintain the fight against management who are intent upon squeezing its workers, but the task is overwhelming. Liénard doesn’t shy away from highlighting the parallels between the despairing, trapped and exploited women in prison and the unhappy, trapped and exploited women on the factory floor.

It’s a bleak denunciation of prison and its inadequacies in dealing with the needs of its occupants. It’s more damning, in some ways, because there is no brutality, the staff seem (in the main) well-intentioned, and conditions are not harsh. It’s just deadening. The tedium of prison life is ever-present, and hope is sacrificed to rules and order.

Joanna, however, refuses to accept the exploitation of the prison production-line. She won’t give up the struggle. That doesn’t make life inside any easier for her. Claudine also has to make decisions, including whether to speak up on Joanna’s behalf in her court case; decisions that hold out some hope for both of them.

It’s a powerful story, self-consciously political, and unique – to my knowledge – in its juxtaposition of prison life and the lives of ‘free’ workers whose welfare is overseen by unfeeling, unreasonable and unsympathetic bosses. Not easily dismissed.