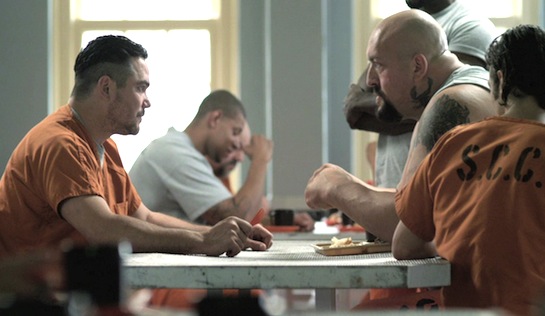 Cain plays Detective Mason Danvers, who arrests big bad man Victor Abbott (213cm wrestler Paul ‘The Big Show’ Wight) and his brother, and has them locked away after a spirited gun battle. Three months later he learns that Victor and his brother have both been released with a crucial witness going missing and charges dropped… shooting at police (and the wounding of Mason’s partner) clearly not being the sort of thing that would hold you in jail. He then finds Victor in his home, in the process of avenging his arrest by bashing Mason’s newly pregnant wife to death.

Mason does what anyone would do in the same circumstances. He kills Victor’s brother and two of his cronies, and gets locked up in Stonewall Correctional Centre – the same prison in which Victor is held. “Wanted by cops, hated by criminals,” is how Warden Snyder (Michael Eklund) describes his new inmate, and that’s not even factoring in the intense personal enmity between Mason and Victor. But why not put them together and see what happens?

Mason is soon set upon by three prisoners in the laundry, but doesn’t enjoy it and systematically knocks each of them off. Roguish cop just got roguer. But no-one seems overly troubled; no Police investigations, no extended period in the Hole. He then turns to bumping off Victor’s lieutenants, which starts to get Victor really angry. It transpires that Victor is being prevented from retaliating by the oily, corrupt Snyder, in his own retributive act; it was he who had arranged for the witness in Victor’s case to go missing and had therefore been instrumental in engineering his release… in the expectation that he would reap great commercial benefits from Victor’s criminal activities in the community – only for Victor to wreck things by letting his lust for revenge take over.

It’s all too absurd… from placing sworn enemies together, to putting a cop smack bang in the middle of the prison general population, right through to when Snyder and his collection of corrupt guards lure Mason’s detective partner into the prison and then kill him to prevent him from looking too closely into the Warden’s activities. Maybe no-one would ever notice the surprise disappearance of a good cop? Or we just hope that he told no-one he’d been called into the prison. And then, in the way of all the best action movies, Mason takes on the whole prison yard in hand-to-hand combat in the midst of a riot. Oh dear.

I find these films really tiresome. Not only is the Warden horribly corrupt (for his own financial benefit) and morally bereft, so too are all the guards (who presumably stand to gain nothing, but are prepared to be complicit in setting up murders and all sorts of things). So bad, and yet all the prisoners are horribly inept at harming the one ex-cop in their midst.

I’m really not sure why the prison genre attracts these scripts, and people willing to regurgitate the same story. Instead, why not a proliferation of Hatfields marrying into the McCoy family films? Or wronged Creationist infiltrates a den of Darwinists films? 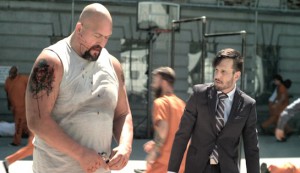 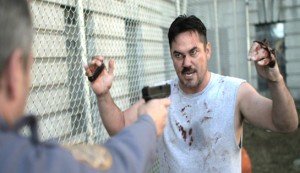 Stonewall Correctional Centre is played by the Riverview Hospital for the criminally insane in Vancouver.