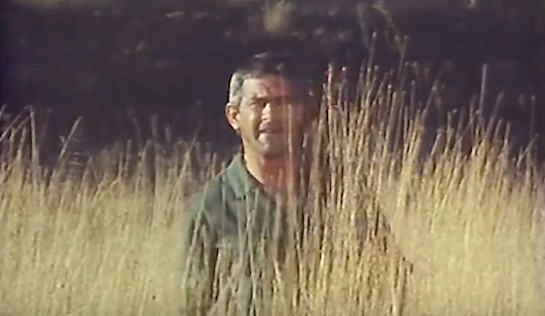 ‘Five star’ is an ironic reference to the Pretoria prison in which this film, and before it the mid-’80s, escape-filled, 14-part Vysfter TV mini-series, is set. Vyfster: Die Slot takes up, apparently, from where the mini-series rather abruptly left off.

It opens with Stollie Williams (George Ballot), ‘a thief, smuggler and cheat’ – but sympathetically played, nonetheless – once more on the run. We don’t see how he got out, and as the only versions of the film I can find are in Afrikaans with no English sub-titles, I can’t tell you.

What I can tell you is that Stollie (which translates as ‘ delinquent’) is desperate to be reunited with his son, Johnny. But back in the prison from which he has escaped, Stollie’s villainous father, Pappa Williams (Patrick Mynhardt) and his two menacing cronies, the softly-spoken Priester (Emgee Pretorius) and the backstabbing Polka (Paul Eilers), conspire to keep him from reaching out to his son. Why? I don’t know. Other prisoners are dragged into their nasty scheming; it is clearly important that Stollie and the boy are kept apart. This of course doesn’t stop them using the boy to lure Stollie into a situation (while he’s on the run) where he is set up to be shot… but he manages to dodge the bullets and, well, escape.

Stollie had earlier accepted a lift on the run from a young woman on a bike, Cat (Kelsey Middleton), and while the nature of the relationship is a bit tricky to understand without words, she ultimately works with him to kidnap his son Johnny – who seems very pleased to see his father, so the word ‘kidnap’ might be unfairly pejorative. Or perhaps not. I note that in the first episode of the TV series Stollie didn’t even know his son’s surname, so maybe the boy is just pleased to see everyone.

In any event, Stollie finally decides that he must confront his father: the ‘root of evil’. One brief synopsis suggests it’s because he discovers that his father might have been responsible for the death of his mother, and that he sets out for revenge. Anyway, in order to achieve this he has to sneak back into the prison; he somehow gets hold of a Prison Officer’s uniform, and with a fake moustache and the star tattoo on his earlobe nicely powdered over, follows a number of other Officers into the jail just as it is setting up for a big prisoners’ concert in front of staff and fellow prisoners.

Just after Pappa performs a quaint item on the musical saw, Stollie and a gun (which might account for his nervousness) have their confrontation with him… but on his way out (minus his fake moustache) he is recognised by another Officer and detained. Luckily, Cat is still on hand to make sure that Johnny gets to visit him inside the jail.

Many of the TV series episodes featured various prisoners escaping, and so it’s an odd prison in some respects: one that on one hand seems full of South African, straight-backed discipline, but on the other is one in which prisoners with clown faces entertain the Officers, has a perimeter that leaks like a sieve, and allows all those escapees the run of the joint.

It’s clearly a little hard to assess the film’s merits without entirely knowing what’s going on… so I’d be grateful for any Afrikaans-speakers who can fill in the gaps. 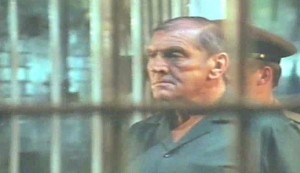 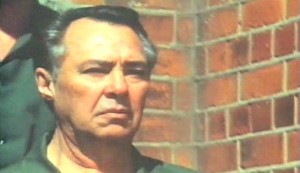 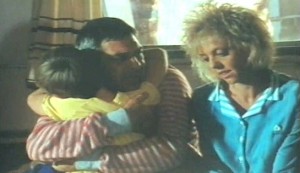 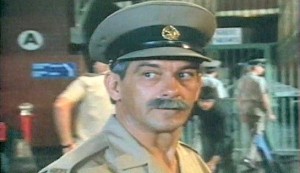