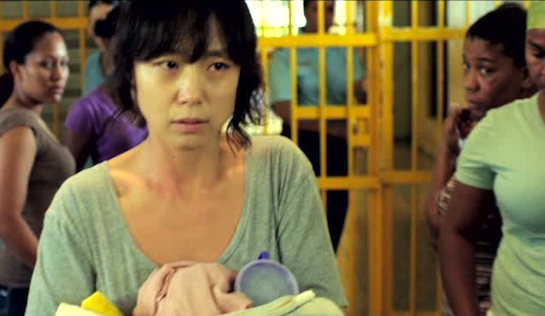 The South Koreans certainly love a good prison tear-jerker – Miracle in Cell No. 7 (2013), for instance, and Harmony (2010) – both of which also star young children, as does this weepy. But Way Back Home is also very reminiscent of Hell In Tangier (2006) and Left to Die (2012), both of which feature prisoners in third-world prisons overseas, hampered by inept, judgmental and disinterested embassy officials, and eventually released after persistent media campaigns. As this one does. The point of difference from the last two is that in this case the prisoner is guilty. Of stupidity, at the very least.

Kim Jong-bae (Go Soo) has set up a motor repair business and all is going well… until an old friend commits suicide and leaves him as guarantor for about $200,000 of the debt he left behind, which Jong-bae hasn’t got. He loses his house and his business; his wife, Song Jeong-yeon (Jeon Do-yeon) remains a little miffed that he never discussed going surety with her.

They move into rented accommodation and have trouble finding the rent money. Then along comes an opportunity; another friend, who has been living in Surinam, offers Jong-bae around $4,000 to carry some uncut gemstones from Guyana. If you get caught, he tells Jong-bae and Jeong-yeon, you just have to pay Customs. Oh, and it’s only women who can be the courier.

Jeong-yeon is not at all keen on the idea, but as their financial predicament worsens she leaves a note for her husband – and their four-year-old daughter Hye-rin (Kang Ji-woo) with a friend – and heads off to the other side of the world. Coming back, with a suitcase almost too heavy for her to carry, she gets caught at Orly Airport in France… with 37kg (or more probably 37lbs, with my subtitler getting mixed up) of cocaine, valued at $120 million. Oh dear.

After a few months in the Fresnes Prison, south of Paris, she is flown to the Ducos Prison on the Caribbean island of Martinique. She speaks no French. She is bullied by the locals. Her cellmate, Yalka (Joanna Kulig), who provides sexual favours to the predatory female head guard, ‘Hellboy’ (Corrine Maserio), for food and money is her only friend. Her French-speaking lawyer is unable to receive instructions from her, and her detention before trial is rolled over every four months with little progress being made. Contact with Jong-bae is difficult; she has no contact with Hye-rin.

Meanwhile, Jong-bae’s repeated attempts to get assistance from the Korean embassy in Paris are fruitless, and it is the embassy officials’ inaction for which the film reserves its greatest wrath. The Consul and his staff are not interested in helping an accused drug-trafficker, or her husband, being significantly more concerned with career and appearances. They refuse to provide an interpreter for Jeong-yeon and neglect to send on to Martinique transcripts of Korean court proceedings in which Jong-bae’s friend confirms that Jeong-yeon did not know that she was carrying drugs.

Things get worse when Jeong-yeon is being escorted out of the prison and Hellboy tries to rape her in the van. In the confusion that follows a passing truck stopping to investigate Jeong-yeon’s cries for help, Jeong-yeon escapes, and soon after recapture is ‘paroled’ to a house in the community where she is to await trial. This is worse in many respects than jail; she remains isolated and becomes dangerously weak with malnourishment. When growing public opinion back in Korea compels the embassy officials to do something for her, the Consul tells her bluntly to expect at least 10 years. She is devastated, still believing that her account of what transpired will be enough to see her freed.

In the end, social media does its trick. With interest in her case burgeoning, a film crew goes to Martinique to report on her circumstances, taking Jong-bae with them for the mandatory reunion scene. It’s not long after that a Korean women living in Martinique is found to interpret for her, a lawyer can be properly instructed, and the court in due course accepts her story and sentences her to one year in prison. She has, by then, been in some form of detention for 765 days.

Way Back Home is based on a true story – that of Korean housewife Jang Mi-jeong who was arrested with 17kg of cocaine at Paris Orly in 2004. It is a long film; overly long, at 2 hours 10 minutes, and still doesn’t cover any of the difficulties that Mi-jeong faced assimilating back into life in Korea, which are arguably part of the main story.

The Ducos Prison scenes were all films at the Najayo Jail in the Dominican Republic, with guards and prisoners making up the extras, so they have an authentic feel. But while the prison scenes tick just about every prison cliché, it is Jeong-yeon’s struggle to get heard and the Korean embassy’s indecent conduct that command all the attention.

It’s a story that has been told before, and better, but it’s inoffensive. 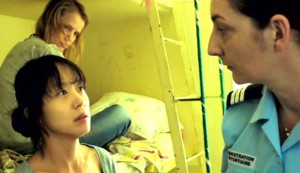 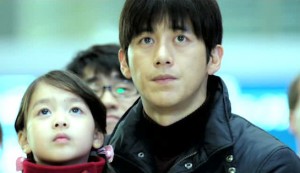