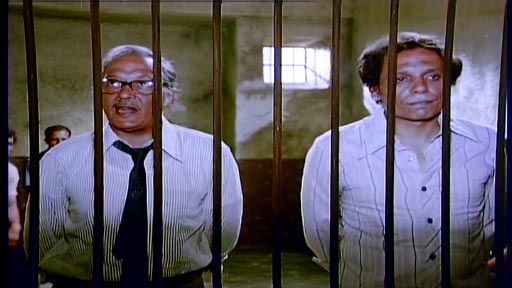 I hope that in Arabic the film’s title conveys a little more excitement than the English translation, for this is a half-decent political satire. It doesn’t amount to much as a prison movie, but then it doesn’t need to.

Gaber (Adel Imam) is a goofy 28-year-old who has just graduated as a geologist. He moves from his parents’ small village to the city to work, but is forced to take menial work looking after transported animals. He meets up with some uni mates and is pressured into throwing a party, the noise upsetting Marzouk, the strict and slightly pompous father of the family living in the apartment below. Marzouk goes upstairs to complain, but is intimidated when Gaber gives the impression that his connections could cause the older man some harm, and Marzouk retreats to his family fearing that he has upset the secret service. To appease his seemingly powerful new neighbour, he starts reading patriotic texts in a loud voice and pasting patriotic slogans on his walls.

Gaber has no interest in politics but is very interested in Marzouk’s beautiful schoolgirl daughter, Mona, one of those wonderful mid-20s teenagers. His feelings are requited. Gaber strategically apologises to Mona’s father for his behaviour on the night of the party; Marzouk remains wary. The two men catch a bus together, and wrestle over who should pay the other’s fare. Marzouk wins out, but doesn’t have the correct change and the ticket collector marches them both off to the police station. As you do.

Their timing is not great. A plot to overthrow the government is rumoured and the police begin arresting dissidents and anyone else who has expressed a critical word about the regime… and of course Gaber and Marzouk’s little problem gets overwhelmed by these matters of national security and they are swept up and bundled off to another prison for interrogation with all the rest. “But we’re the bus guys!” they protest, but no-one (not even the person who gave the film its English title) pays any attention.

The news of Egypt’s early victories over Israeli forces in (or in the lead up to) the 6-Day War reaches the prison and all the supposed dissidents are united in their celebrations. The men who were allegedly plotting to overthrow the government are similarly united in their despair at the Israelis’ victory a short while later. When one prisoner dies from his beatings and the authorities try to pass it off as him being killed while trying to escape, the dishonesty of the regime is exposed to all and the prisoners revolt.

It’s not a film which seeks to comment on imprisonment. But under the guise of a gentle comedy it provides some telling political comment on the treatment of Egypt-loving critics of the government. It’s long (over 2¼ hours), but worthwhile. And, supposedly, it’s based on a true story. 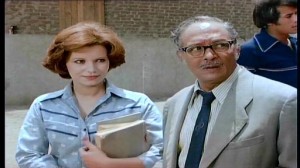 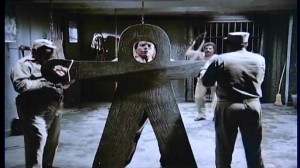