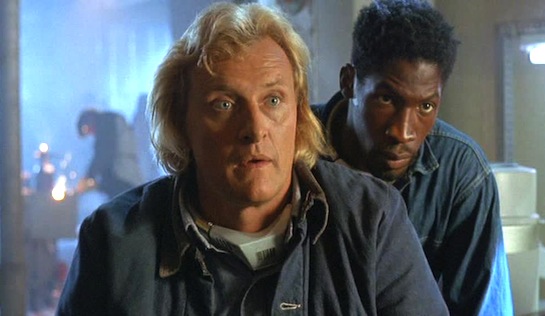 I’m not keen on sci-fi prison movies, so it’s good that while this is set ‘sometime in the future’, it’s hardly futuristic, with very 1980s-90s cars and fashion and people speaking on pay phones. But like Fortress (1992), it provides a wonderful illustration of real prison innovation.

Rutger Hauer plays Frank Warren, imprisoned for his part in a $25 million diamond heist, or for having really terrible hair, or both. The prison he is sent to, Camp Holliday, is the brainchild of Warden Holliday (Stephen Tobolowsky), and it is, well, different. It is co-ed, for a start, and the inmates are even allowed timetabled intimate fraternisation to relieve tension. More importantly, every inmate has to wear a clunky electronic collar filled with explosives and linked to another unknown inmate; if the two are separated by more than 100 yards, or a collar is tampered with, both collars are detonated. The need for fences and expensive guards is significantly reduced.

Warren (or, to use the only name by which he may be known in the prison, Magenta) is of great interest to many people, as he has still not revealed where the stolen money is. The others in his gang (his former girlfriend and his former best friend) who double-crossed and shot him, want their share, as does Warden Holliday who, in a manner reminiscent of The Slams (1973), pressures Warren to divulge where the loot is hidden. Or rather, he tortures him by placing him in ‘the floaters’ – a shallow pool into which the prisoner is locked with his own effluent – for several weeks to prompt his memory.

Warren remains tight-lipped, but when fellow-prisoner and obvious-love-interest Tracy Riggs (Ivory, Mimi Rogers) claims to have discovered that she is his linked-collar partner and drags him along on an escape, the race for the loot is on. End prison movie.

Despite its innovation, there are some aspects of the prison that trouble me. I worry about the prison’s legal liability if a prisoner chooses to commit suicide by walking away, unconcerned at the innocent party who also gets his or her head blown off. I wonder whether, if you insist on all prisoners being referred to just by a colour, the size of the prison population might not be unnecessarily limited by what I expect is a finite number of colour names. I am concerned that if you place a 100-yard limit on the distance prisoners can be apart, you are limiting the size of the prison to a ridiculously small footprint. I fear that the beeping alert that sounds on the collars before they explode, giving the prisoners time to get back to within 100 yards of each other, might not somewhat defeat their purpose. And I worry about the effectiveness of ‘the floaters’ when Warren can emerge without the trench foot, dermatitis and hypothermia (not to mention extremely wrinkly skin) that one might expect from prolonged immersion in water.

Anyhow, the movie disintegrates into a pretty standard action flick once Magenta and Ivory escape. There are tense moments when they almost get separated, loads of inept shots taken at them by people in pursuit (including his old partners-in-crime), and, of course, lots of predictable sexual tension. Ho hum.

Wedlock will be remembered for its exploding collars and, I’m afraid, not much more. 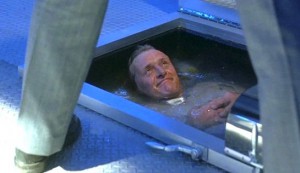 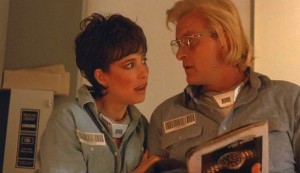