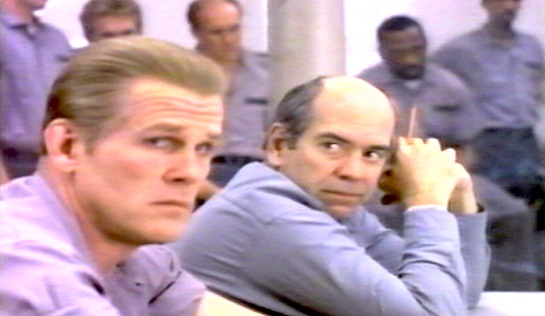 Lee Umstetter (Nick Nolte) is serving life without the prospect of parole. He throws himself off what looks like the fourth tier of his San Quentin cellblock, but somehow manages to sustain only a couple of broken arms. He tries to hang himself, but wakes his cellmate by thrashing around. Not good at crime, not good at killing himself. When he asks the librarian for the biggest book he has, you think he’s going to try jumping off it head first, or to weigh himself down as he tries to drown himself.

But no; he wants to read. And once he starts, he reads rapaciously. Then someone has the idea of putting on Waiting for Godot in the prison (everyone knows how Samuel Beckett just resonates with prison populations!), and the penny drops for Umstetter. This is what he can do with his life! He rattles off a quick play of his own, Weeds, and gets permission to perform it in the jail. It’s a scathing commentary on San Quentin, cunningly disguised by pretending it’s a French prison so the authorities won’t realise that it’s critical of their regime. Not only is it a hit with the prisoners, but a local critic, Lillian Bingington (Rita Taggart), sees it and loves it. And immediately starts agitating for Umstetter’s release. What’s more, she succeeds; the Governor commutes his sentence and after 12½ years or thereabouts, he’s not only back on the streets, but between Lillian’s sheets.

The play is then taken on tour. Umstetter recruits back his original cast from San Quentin, all of whom have been released. Thank goodness for generous parole conditions in California; the troupe can travel together, in a group, outside State boundaries, and they never even have to report to a parole officer! Good on California for accommodating true artistic endeavour. But they hit some hurdles. The play is not as warmly received as it was in prison, and then someone twigs that it much of it is highly derivative of Genet’s Deathwatch. Well, plagiarised, actually. So it needs to be rewritten. Much intellect is brought to bear on the rewrite and it’s decided that there will be scaring of the audience with clubs and batons. Somehow it makes it to Off Broadway, where it gets a deservedly lukewarm review, which is just as well, because up to that point one is left wondering why an amateurish collection of skits and songs, reminiscent of an embarrassing school production, hasn’t been laughed off the stage.

No longer selling out theatres, they get a gig at a prison. They choose not to modify the more rabble-rousing bits, where they urge the audience to not accept the prisoners’ lot. That can be a little incendiary in a prison. Unsurprisingly, the prisoners riot, and the cast gets caught up in it. All revert very quickly to being prisoners again, even though they’re not. “Do you ever get homesick for the joint?” one happens to ask earlier. It’s the most interesting question posed by the film, as all the ex-prisoners define themselves in some way by their time inside, and all seem happy to be carrying weapons that could presumably see them thrown back in at a moment’s notice. Of course, sound decision-making is rarely a distinguishing feature of the prisoner cohort, but none seem prepared to completely cut themselves adrift from their identity as criminals.

That’s not the message you’re supposed to leave with, though. That would be that the most beautiful things can grow out of the darkest prison. Or perhaps that poor judgement can pay, because everyone suddenly wants to see the play that incited the riot, and it becomes a hit again, and even plays on Broadway.

The film has a lot of problems. For a start, Nolte is never convincing as a con, or a released con, for that matter. Some of the others are better. And the prison settings, thanks it seems to the Stateville Correctional Center, Illinois, aren’t bad. But the play reveals little of the inmates’ experiences or feelings, preferring the banal and hackneyed to the novel and insightful. In the end, you really have to believe in Nolte or the play, and I don’t think you can do either. 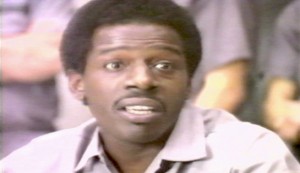 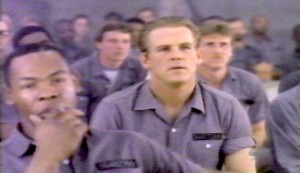