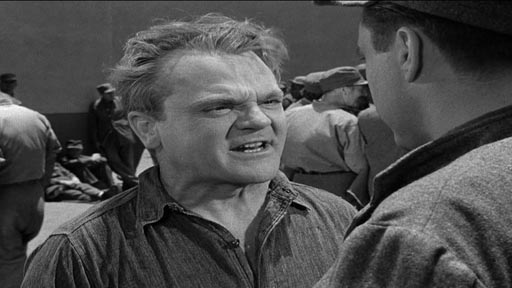 James Cagney as the ruthless, psychopathic gangster ‘Cody’ Jarrett holds this film noir classic together. He’s not your everyday, two-dimensional gangster. His third dimension comes principally in the shape of his pathological relationship with his fiercely protective Ma (Margaret Wycherly), whom Cody loves more than his vapid wife Verna (Virginia Mayo). More than anything, in fact. He’s also prone to crippling headaches and a deteriorating mental state which render him temporarily vunerable, but when his Ma is around she makes sure that his position as gang leader is never compromised.

Cody and his gang kick off with a big train heist, killing four railwaymen (and one of their injured own, who threatened to be a liability) in the process. He knows that if convicted he’ll get the gas chamber, so as the coppers close in he smartly surrenders in another State and nods to another robbery that occurred at the same time as the train job. He gets 1 to 3. The Feds know he didn’t do it but play along with it, hoping to get more evidence on him while he’s in jail. They need someone Cody will trust almost as much as his Ma. They turn to an experienced prison undercover man, Hank Fallon (Edmond O’Brien), who has to sift through the entire prison population to ensure that all the prisoners who know him as a cop are transferred before he arrives. There’s a fair few of them. If he’s that well known as a cop, you think they’d find another undercover man, but they don’t, and Hank becomes Vic Pardo, prisoner and mother-substitute.

The authorities put Pardo and Jarrett in the same cell. Pardo saves Cody’s life when one of the gang, Big Ed, tries to have him knocked off so that he won’t have to deal with his boss when he gets out and finds that Verna has taken to warming Big Ed’s bed. Then, in the middle of the mess hall filled with hundreds of prisoners, Cody learns that his Ma has died (doing the motherly thing, it turns out, trying to kill Big Ed to prevent her son being knocked first), and he has an extravagantly deranged response and is determined by the doctor to be insane.

In the infirmary Cody gets hold of a smuggled gun and, with Pardo, several other accomplices, the bloke who tried to kill him and a couple of hostages in tow, breaks out of the prison in the doctor’s car. Cody’s first stop is to eliminate Big Ed. Oddly, he takes his cheatin’ wife back after she claims she acted under duress. She neglects to tell him that she shot his Ma in the back.

Cody then plans a huge heist of a petro-chemical plant, using a petrol tanker as a Trojan horse. Pardo is able to alert the Police en route to the plant, but his cover is blown when he is recognised by an ex-con he’d locked up and whom Cody had brought in to drive the truck. Somehow, he escapes. Cody doesn’t. Surrounded by Police and the last man standing, he hysterically cries out, “Made it, Ma! Top of the world!” while on top of a globe-like storage tank, just before being blown to smithereens.

As a gangster movie it’s tough, bloody and punchy. Except for the bits where it proudly showcases Police radio tracking technology in meticulous detail. No doubt it was new and very exciting back then. Not so much now. As a prison movie, it’s a bit ho-hum. There are moments of real tension where Pardo’s true identity might be revealed, and the big scene where Cody loses it on learning of his Ma’s demise (where strangely every one of the other prisoners declines to get involved as Cody is clocking guards on the jaw right, left and centre). And a memorable scene where a gleefully intense Ma, almost her son’s equal in psychopathy, visits him and commits to shortening Big Ed’s life expectancy. All up, the prison bits are solid, but nothing special. 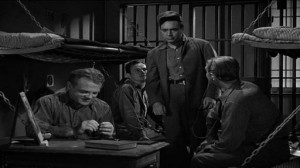 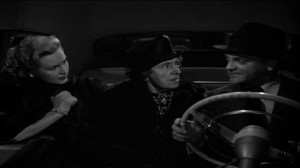