I can be a wee bit mistrustful, I know. As soon as I finished watching this movie, based on the life of Yevgenia (or Eugenia) Ginzburg, I sought out her true life story to see if it matched the film version. There are some differences between the two, it seems, and some of which I get; after all, you want people to watch the movie.

For starters, let’s just say that Emily Watson, who plays Ginzburg in the film, flatters her in the looks department. Ginzburg serves her sentence in several camps and prisons, rather than just the one shown. And when she is at her most debilitated she is saved not by the doctor she ultimately falls in love with, but by an unheralded, compassionate doctor wife of a secret service agent, Dr Klimenko. More critically, perhaps, in the film Ginzburg is a professor of Russian literature, wont to break out into quoting big slabs of poetry or prose, or reciting Oblomov to a rapt dormitory, word for word. In real life, she was an associate professor teaching the history of the All-Union Communist Party, and later of the history of Leninism. Not quite so romantic.

Why such departures? It makes her a more sympathetic subject but might make you question whether the rest of the portrayal is accurate. What if she were indeed courageous (on that, it must be said, there seems to be agreement), but instead of being generous and caring she was in fact callous and selfish – and that is how she managed to survive whereas many of her fellow prisoners, some of whom could challenge her version of events, perished? It seems odd to risk her credibility by fictionalising parts of her life. Or maybe that’s just me.

But back to her filmic story. It’s 1934; Ginzburg is a member of the Communist Party, teaching at Kazan University and writing for the Red Tartary newspaper. Things suddenly turn sour. Sergey Kirov, a Bolshevik rival of Stalin’s, is assassinated, but Stalin nonetheless embarks on his Great Purge to weed out those responsible. One of Ginzburg’s fellow professors, Nikolai Yelvov, is arrested and Ginzburg also comes under suspicion for “insufficient political vigilance” – which amounts to failing to anticipate that Stalin would write a paper that denounces the ‘Trotskyist’ view of history that Yelvov was alleged to have espoused and Ginzburg failed to correct. It’s also possible that Yelvov was arrested for having unfashionably long hair.

After much time in limbo after Ginzburg is expelled from the Communist Party – awaiting being charged after refusing to concede her wrongness – she is arrested in 1937, interrogated by the odious Beylin (Ian Hart) and summarily tried (in a trial lasting seven minutes, including the time taken for the judges to retire to consider their verdict). She is sentenced to ten years in prison and the forfeiture of her property for belonging to a Trotskyist terrorist counter-revolutionary group. She is joyous. “I’m to live then,” she says, relieved. She leaves behind her husband, Pavel Aksyonov, and two young children.

She is sent to a Siberian camp. It is everything you would expect such a camp to be. Cold. Insufficient food. Guards who rape the female prisoners. Harshness. It is there that Ginzburg is told, perfunctorily, that Pavel has committed suicide in custody, and that her older son, Alyosha, has died in a youth camp.

Ginzburg is distraught at Alyosha’s death, and has to be nursed back to health by the Crimean German camp doctor, Anton Walter (Ulrich Tukur), whom she despises. Or, at least, despises until she discovers that he too is a prisoner. He offers her a job in the infirmary. They fall in love, but he gets expelled (or transferred) after they find her red dress in his bed. Luckily, he is waiting for her in the frozen tundra when she is released. (In real life, they then waited out five years in exile until being fully released in 1955, two years after Stalin’s death. Dr Walter died soon afterwards, in 1959.)

Loss is never far away in the telling of Ginzburg’s story: the loss of liberty, obviously, and the loss of family, but also the loss of dignity and integrity as citizens queue up to confess their misguidedness in the hope of avoiding being charged, or executed, by Stalin’s men. The loss of reason, the loss of fairness and decency. The impotence of people in resisting the regime. Their disenchantment with the communist ideals. The loss, through suicide, of those who could bear no more. The loss of innocence, and hope.

Ginzburg stood up the the regime, refused to admit to things that she had not done… and retained her dignity despite all that she lost. It is a powerful story, competently (if not entirely accurately) told. 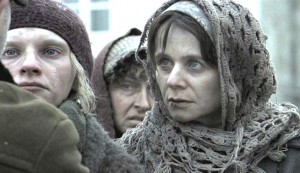 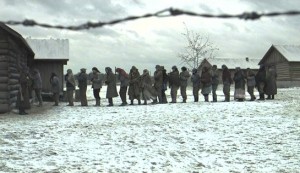 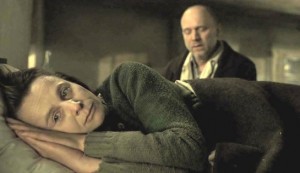 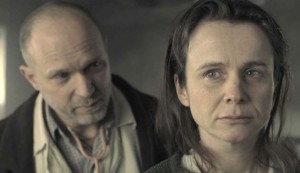