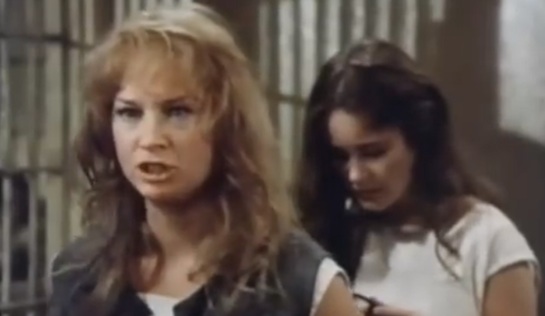 This (along with several other contenders) could serve as a baseline against which all women’s prison movies are measured. It’s far from great, and far from terrible. It’s camp, but not too camp. Well, it’s over-the-top camp at times. It has a brave heroine, a particularly nasty villain, plenty of true-to-life prisoners who have no wish to fly above the radar, some drama… and, presumably because it’s made-for-TV and it’s 1972, a surfeit of beautiful women but no shower scenes, lesbian scenes, or lascivious male officers. What’s more, it stars two prison movie greats: Ida Lupino (Women’s Prison, 1955) and Barbara Luna (The Concrete Jungle, 1982).

In a slight twist from the more traditional undercover-cop-in-prison, parole officer Sandra Parker (Lois Nettleton) is so outraged at the sudden and unexplained death in prison of one of her parolees, Ginger, that she decides to go undercover to expose Chief Matron Claire Tyson (Lupino), who she is sure is complicit in Ginger’s death. Parker confides only in fellow parole officer Helen Anderson – not even telling her boyfriend what she plans to do. Together, she and Helen fabricate a record of a ‘Sally Porter’, and arrange for Sally to be brought into custody on a phony breach of parole. The ruse is intended to last only two weeks – after which Helen will ensure that Porter is extracted.

It proves an action-packed two weeks. Sally gets to share a cell with a classic prison ensemble – Dee Dee (Jessica Walter), the tough girl who does Tyson’s bidding; the beautiful Leila (Luna); Melinda (Belinda Montgomery), a frightened innocent (in every sense of that word), convicted of the shotgun murder of her husband; Alice (Kathy Cannon), a troubled, disturbed young woman; Billie (Lucille Benson), an old-timer; and Althea (Hazel Medina), the sole African-American and a heroin-using recidivist.

Tyson has ruled the roost as Chief Matron for some 15 years, and is not about to let go of her power. Sally, as she had hoped, witnesses some of her cruelty first-hand. She sees Tyson give the nod to Dee Dee to pick a fight with a prisoner of whom she doesn’t approve, and sees Tyson fail to intervene until the woman has been well beaten. And she experiences first-hand Tyson’s nasty games-playing and arbitrary punishments.

And then Tyson doesn’t punish the women after they celebrate Leila’s birthday without permission, and the not-knowing when the punishment will come creates such a build-up of tension that they riot in their cells. Well, they create a bit of a disturbance and throw lit pieces of paper into the corridor.

Sally repeatedly finds that she can’t stand by and do or say nothing, and unhelpfully questions Tyson’s approach. Not sensible. Nor is it sensible to ask lots of questions about Ginger’s death, because of course it gets back to Tyson, and soon Sally is a marked woman. Then she learns that Helen – the only person who knows her true identity (other than one other prisoner who recognises her) – has been shot and killed. Oh dear.

The denouement is a tad disappointing. In a desperate attempt to escape Tyson (having been told by all that her days are numbered), Sally attempts to escape from the prison… which saves Tyson the trouble of setting up an ‘accident’ to eliminate her and gives her every excuse to have her shot. Tyson catches Sally before she gets to the wall. They fight. When other guards arrive and pull Sally off the Chief (who is armed only with a baton, which makes shooting escapees harder), Sally doesn’t actually accuse her tormentor of anything, but simply implores the Warden to believe that she is really a parole officer – and that oddly seems to be sufficient for the Warden to give a withering, accusatory look at his chief guard. Instead of aggressively deflecting blame back on to the escaping prisoner (as one might expect her to), Tyson meekly assumes the posture of a defeated woman: the game, she senses, is up.

It’s not the cleverest prison movie but there are some quaint touches. My personal favourite is when Porter seeks medical attention for the migraine-stricken Leila, and is sent to the lock-up for her impertinence; Melinda protests and Tyson sends her there, too… and the two women are placed in the same cell in solitary. Solitary ain’t what it used to be.

This is good, solid, standard fare. But it contains no chains if you’re looking for chains. 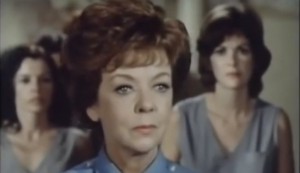 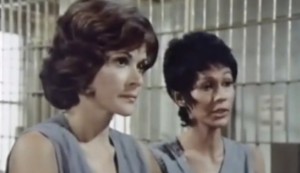